Yes, Adulting Is A Thing Now 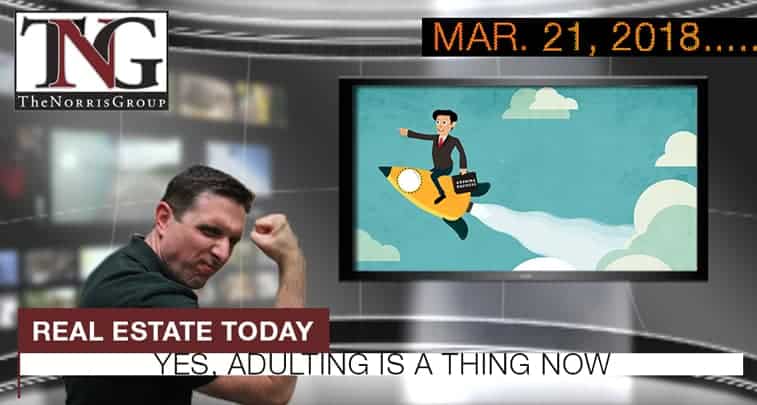 Why is adulting getting harder?  The National Association of Realtors reported a 3% increase in existing-home sales in February.  Interest rates were raised once again by the Federal Reserve, and more hikes could be on the way by 2020.

” Despite consistently low inventory levels and faster price growth, existing-home sales bounced back in February after two straight months of declines, according to the National Association of Realtors.”

“Mortgage applications decreased 1.1 percent from one week earlier, according to data from the Mortgage Bankers Association’s (MBA) Weekly Mortgage Applications Survey for the week ending March 16, 2018.”

Realtor.com – “Get Ready for the Most Competitive Spring Home Buying Season Since the Great Recession” (3-21-2018)

“Spring is here — and with it comes the most popular time of year to shop for a home. But if prospective home buyers don’t prepare properly, they could be in for an agonizing search.”

“Federal Reserve officials, meeting for the first time under Chairman Jerome Powell, raised the benchmark lending rate a quarter-point and forecast a steeper path of hikes in 2019 and 2020, citing an improving economic outlook.”

“Instead of hiring a real estate agent, Ron and Marilyn Hougardy essentially recruited a computer to sell their four-bedroom home in Thousand Oaks, California last December.”

“How to win a real estate bidding war in today’s home buying market is a fine art. From Los Angeles to San Francisco to Boston offering a home’s asking price is just the starting point in negotiations.”

“President Donald Trump has made eliminating regulations a top priority of his administration and has tried to limit the reach of one of the chief mortgage regulators — the Consumer Financial Protection Bureau.”

Freddie Mac – “Why is Adulting Getting Harder?  Young Adults and Household Formation” (3-21-2018)

“Young adults of this era lead lives quite different from earlier generations. Compared to older generations, as a group they have been slow to reach life milestones traditionally associated with adulthood, such as getting married, having children, living independently and forming their own households.”

Bruce Norris will be presenting Stay Put or Cash Out with WEREP on Friday, March 23.

According to the latest S & P/Dow Jones Indices, default rates for bank cards increased for the fourth straight month in February, up two basis points to 0.94%.  The Mortgage Bankers Association reported that despite a decrease in commercial mortgage-backed securities, debt on commercial and multifamly mortgages was still strong at the end of the year, having increased 5.8% to $162 billion.  Texas was seeing a boom in hotels as more were being constructed.