Yeah We’re Movin’ On Up, To The Rent Side 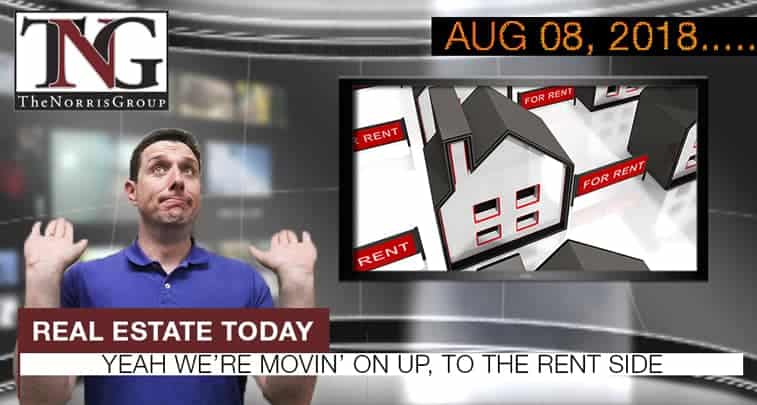 All 50 of the largest US cities saw a rise in the share of renters.  The Mortgage Bankers Association reported a 3% decrease in mortgage applications from last week.  One-third of the largest cities in the U.S. are seeing increases in available inventory.

“There were more renters in 2016 than in 2006 in each of the 50 largest U.S. cities. Memphis, Tenn., Las Vegas and Honolulu reported the greatest increase in rentership since 2006, according to a new Zillow analysis.”

“Mortgage applications decreased 3.0 percent from one week earlier, according to data from the Mortgage Bankers Association’s (MBA) Weekly Mortgage Applications Survey for the week ending August 3, 2018.”

“Don’t want to get denied that mortgage? According to new data, you might want to avoid conventional loans—and small-dollar ones—especially if you have less than perfect credit.”

“Is a smart home truly smart if it’s not built by a robot? The DFAB House, a three-story building currently under construction at the technical school ETH Zurich, isn’t just built by one robot—it’s the product of five robots, each armed with a special digital fabrication skill set needed to autonomously construct a building.”

“According to new data from Realtor.com, high-priced local markets around the United States are showing signs of inventory climbing for the first time in months.”

“Although residential architecture trends have taken a turn towards more rustic accents and designs, the trend does not extend to a home’s floor plans. Homeowners are still loving the entry-kitchen-dining-living room combination.”

“Amidst staggeringly low inventory levels in much of the country during the second quarter, existing-homes sales cooled and home prices maintained their robust level of appreciation, according to the latest quarterly report by the National Association of Realtors.”

“U.S. cities struggling with soaring housing costs have found some success in lowering rents this year, but that relief has not reached the renters most at risk of losing their housing.”

Bruce Norris will be giving his latest Market Update with the Chino Valley Real Estate Professionals on Friday, Septemeber 21.

Baby Boomers who refused to sell were adding to the housing shortage.  A recent study from Trulia showed those with a greater chance of owning a home and higher ownership rates were those who graduated from college and received advanced degrees.  An entire street in San Francisco had just been purchased for $90,000, much to the annoyance of many of its residents.