What About That Home Makes You Tick? 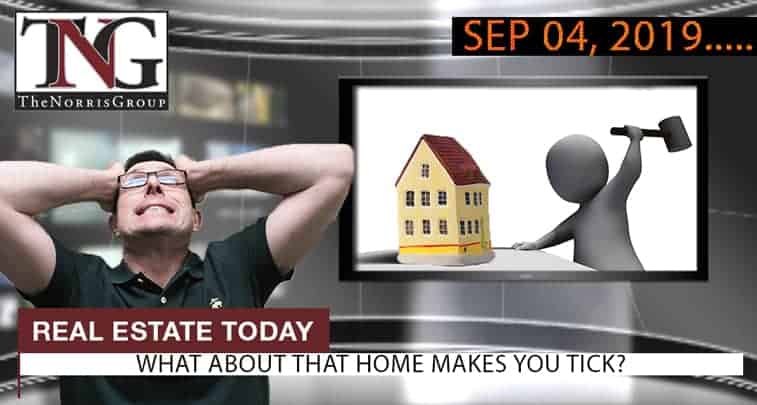 Realtor.com listed 11 quirks that can prevent you from selling your home?  The Mortgage Bankers Association reported a 3.1% decrease in mortgage applications from last week.  Building permits in California decreased 10% last month to their lowest since the recession.

“Mortgage applications decreased 3.1 percent from one week earlier, according to data from the Mortgage Bankers Association’s (MBA) Weekly Mortgage Applications Survey for the week ending August 30, 2019.”

“Ever spend the night at a friend’s or relative’s house where they reveal some quirky shortcoming in their home?”

“Building permits in California plunged 10 percent in July, the lowest level since the Great Recession in 2008, according to the state’s Legislative Analyst’s Office.”

“Water is one of those things that’s just sort of… there. As long as the tap turns on, you don’t really think about it.”

“Just 10.4 percent of offers written by Redfin agents on behalf of their homebuying customers faced a bidding war in August, down from more than 42 percent a year earlier. That overtakes last month’s 11.4 percent bidding-war rate as the lowest on record since at least 2011.”

“The cities and towns that are the most — and least — expensive for the over-65 set, according to a new study.”

Bruce Norris will be presenting his latest talk 10 Decisions To Make Before The Next Downturn with SDIC on Thursday, September 5.

New home looks like a deal…Although the U.S. continued to remain a seller’s market, more were holding out to sell.  With this news, home prices increased 6.2% in July since the owners were waiting to sell in anticipation for an increased ROI.