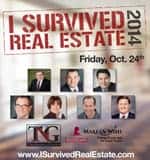 Tonight is the night for the Norris Group’s annual event I Survived Real Estate 2014!  The video this week highlights the events main speakers, our sponsors for the event, and thanks everyone for their help and support.  New U.S. home sales increased last month, although not by much having increased only 0.2% to 467,000.  Foreclosure inventory is the lowest it has been in six years according to Black Knight Financial.  Federal Reserve plans to hold onto  over $4 trillion in order to help push the economy’s growth once quantitative easing is done.

“Purchases of new homes in the U.S. were little changed in September after the prior month was revised down, showing an uneven recovery that will limit how much residential real estate contributes to growth.”

“At 1.76% of active mortgages, the nation’s inventory of loans in foreclosure is now at its lowest point since February 2008, according to the September report from the Data and Analytics division of Black Knight Financial Services.”

“Federal regulations, enacted after the collapse of the subprime market spurred the financial crisis, are boosting mortgage costs this year. Most lenders are responding by providing home loans only to borrowers with near perfect credit, shutting out creditworthy Americans whose loan files are too expensive to review and complete.”

“When it rains, it pours, and Ocwen Financial Corp. is in the biggest storm of its life. The largest U.S. nonbank servicer, which is being accused of backdating thousands of letters to struggling borrowers, may have also violated a consent order.”

“The financial media is abuzz with talk about tight credit and how it must be made looser to stimulate lending and the economy.  This chatter, plus lenders’ natural desire to increase business, combines as pressure at the bottom of the credit cycle to prompt lenders into making bad loans again. But why did credit get this tight?”

“Construction companies that build homes for Americans in some states are losing skilled workers to six-figure jobs offered by oil companies.”

“Quantitative easing may turn out to be a gift that keeps on giving for the U.S. economy.  As the Federal Reserve prepares to end its third round of bond buying next week, the central bank plans to hang on to the record $4.48 trillion balance sheet it has accumulated since announcing the first round of purchases in November 2008.”

TONIGHT, Bruce Norris will be presenting the 7th annual I Survived Real Estate 2014.

Bruce Norris of The Norris Group will be presenting Secrets to Becoming Wealthy with SJREI in Sunnyvale on Thursday, November 6.

Bruce Norris of The Norris Group will be holding his Property Buying Boot Camp Tuesday-Thursday, November 11-13.

Mortgage rates decreased again in the wake of the government shutdown with 30 year rates dropping to 4.13% and 15-year rates to 3.24%.  Residential property sales increased drastically with the increase in investor demand.  Home value appreciation was showing signs of decline and was expected to continue to do so over the upcoming year.