The Most Significant Regulatory Relief Bill Since the Great Recession 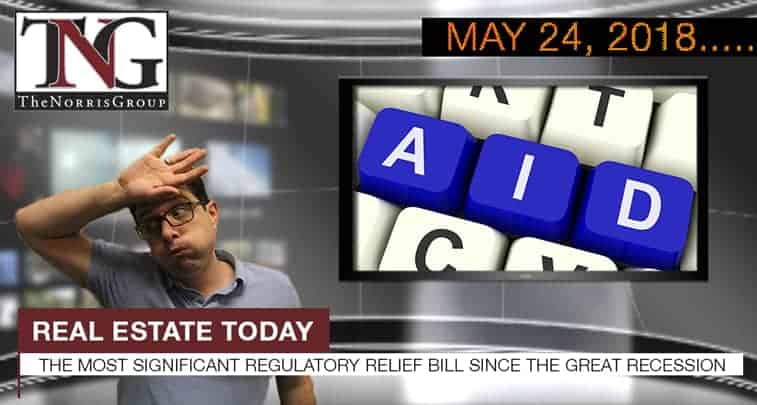 Dodd-Frank relief bill is signed by President.  Existing home sales decreased 2.5% in April according to the National Association of Realtors.  Meanwhile, the value of homes increased at their fastest pace in 12 years, having risen 8.7% to a median value of $215,600.

“Confidence in the multifamily housing market remained positive in the first quarter of 2018, according to the Multifamily Production Index (MPI) and the Multifamily Vacancy Index (MVI) released today by the National Association of Home Builders (NAHB).”

“U.S. sales of existing homes tumbled 2.5% in April — with the costs of buying a home jumping and would-be buyers facing a persistent shortage of properties on the market.”

“National median home values are rising at their fastest pace in 12 years, according to the April Zillow Real Estate Market Report. Over the past year, home values across the country rose 8.7 percent to a median value of $215,600.”

“Freddie Mac (OTCQB:FMCC) today released the results of its Primary Mortgage Market Survey (PMMS), showing that mortgage rates moved up over the past week to their highest level since May 5, 2011.”

“The most significant regulatory relief legislation since the crisis made it to the finish line Thursday as President Trump signed targeted reforms of the Dodd-Frank Act into law.”

“The measure will seek to repeal the Costa Hawkins Rental Housing Act, a law passed in 1995 that places restrictions on local rent controls.”

“A “floating village” project is being eyed in north San Jose’s Alviso hamlet by tech company Arx Pax, using a technology that would deploy a group of pontoons beneath the buildings to protect the development from floods and earthquakes.”

Aaron Norris will be presenting Technology Trends and Effects on Real Estate at the SRCAR Realtor Expo Thursday, June 7.

Bruce Norris will be speaking at the California Chapter of the Appraisal Institute’s 21st Annual Inland Empire Market Trends on Thursday, June 7.

Bruce Norris will be presenting Stay Put or Cash Out with the San Diego Investment Club on Thursday, June 7.

Bruce Norris will be speaking at the NSDREI 14th Anniversary Dinner Party on Tuesday, June 19.

Black Knight Financial Services released their Mortgage Data Report for April 2017, which showed a 13% increase in mortgage delinquencies and foreclosures at their lowest in ten years.  Existing home sales decreased 2.3% in April, while pending home sales 5.9% month-over-month and 7.4% year-over-year.  Zillow held a contest for data scientists to be awarded $1 million to whoever best improved their Zestimate algorithm.