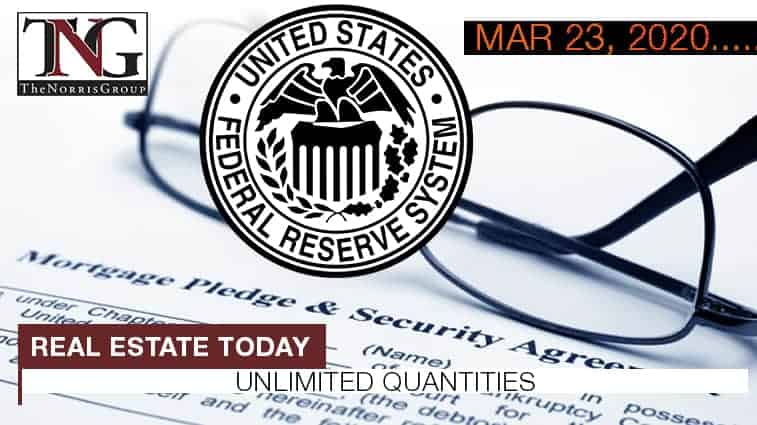 Today’s News Synopsis: Fed agrees to buy Treasuries and Agency Mortgages. Including commercial.  The National Association of Realtors announced today what they are doing to aid in the COVID-19 relief.  With the increasing pandemic, it is now required for contracts to contain Coronavirus addendums. In The News: Inman – “Coronavirus Clauses Become Ubiquitous As Pandemic Worsens” …

Today’s News Synopsis: The Mortgage Bankers Association reported their predictions that purchase originations will increase 10% next year.  Both builder confidence and housing starts increased with starts growing by 6.5% and builder confidence at 64.  Default rates on mortgages decreased to 0.89% according to the latest S & P Dow Jones Index.   In …

Today’s News Synopsis:   Two more banks closed in Tennessee and Arizona, bringing the new total now to 20.  New home sales decreased last month by 13.4% according to the Commerce Department.  The mortgage delinquency rate also decreased to 6.41% after having increased to 6.7% the month prior. In The News: Housing Wire – “Servicers …

Today’s News Synopsis: Mortgage rates are 3.62%, a new record, after declining from 3.66% last week.  176,000 new jobs were added to the private sector, while at the same time unemployment claims decreased.  In a big news story, a recent investigation of Countrywide Loans found that the servicer gave executives at Fannie Mae and current …

16,208 new and resale houses and condos sold in Southern California in November. The NAR claims 9 of the 10 most cost-effective home repair projects in terms of value recouped are exterior replacement projects. Keefe, Bruyette & Woods expects revenue from multifamily real estate investment trusts to grow at an annual rate of 4.6% in 2011. Investor confidence in U.S. commercial property is the highest since 2007, according to Bank of America.

HAMP’s permanent loan modifications increased 5.9% by the Bank of America, while the number of applications for mortgages increased 13%. On the same note, according to the Mortgage Bankers Association the number fo refinancings for mortgages increased 17.1% in the previous week. Fannie Mae and Freddie Mac began searching for any bad loans or dishonest loan applications, while in other news Barney Frank believes Fannie Mae and Freddie Mac should no longer be allowed to operate. Also, as the demand on homes decreases, the merging and aquisition of homebuilders may rise. On a similar note, Veri-tax is now owned by Blue Horizon Capital. The Real Estate Book was just released, hopefully making looking for a home easier. In Orange County, the number of homes repossessed decreased 10%, but default notices have increased 9%. Homebuilders are looking to build more smaller homes, as this is what the current generation seems to be interested. Finally, the Fed’s have come up with a plan to prepare for an increasing decline in the economy by using money made from securities to buy Treasuries.