Sorry Millennials. No 2008 Bargains In This Recession 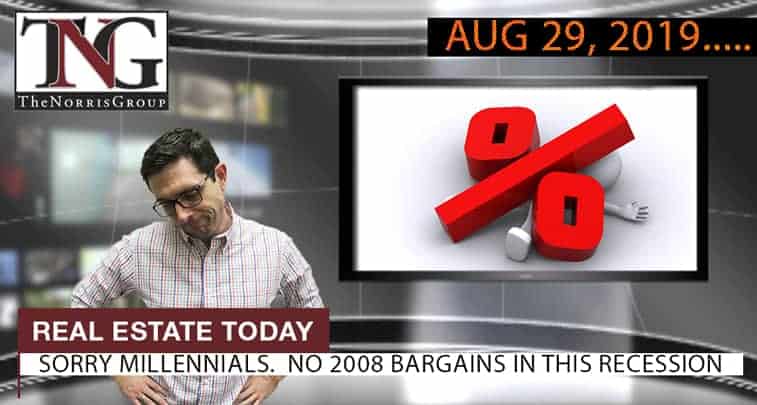 A recession won’t help you buy a house.  Mortgage rates increased slightly from last week but generally held steady with 30-year rates now at 3.58% and 15-year rates at 3.06%.  The National Association of Realtors reported a 2.5% decrease in pending home sales in July.

“As mortgage interest rates continue to drop to record lows, many homeowners are wondering: Should they refinance their mortgage right now?”

“Pending home sales fell in July, reversing course on two consecutive months of gains, according to the National Association of Realtors. Of the four major regions, each reported a drop in contract activity, although the greatest decline came in the West.”

“The 2008 recession yielded housing bargains in subsequent years. Curbed’s data reporter explains why that won’t be the case for the next one.”

“Americans have been reluctant to buy homes lately, thanks to uncertainty about the US economy. Now their fears are showing up in the data.”

Bruce Norris will be presenting his latest talk 10 Decisions To Make Before The Next Downturn with SDIC on Thursday, September 5.

Recessions fears rising.  The National Association of Realtors reported a 0.7% decrease in pending home sales for July.  There are 4 specific “improvements” you could make to your home that surprisingly don’t add any value.  What could they be?