Realtor.com Releases List of Cities Where Downtown is the Popular Spot 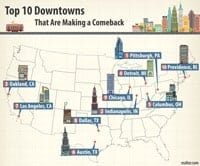 New data released shows the hottest spots for real estate in New York, specifically Brooklyn and Manhattan.  More and more Russians are showing an interest in real estate located in New York City.  Realtor.com also released a list of cities where downtown is becoming a popular place to live.

“The never-ending quest for the perfect apartment in New York City could be getting that much tougher, new data suggests, thanks to new competition for scarce supply from other parts of the world—and one surprising country in particular.”

“In January 2017, an estimated 29,000 homeowners received permanent loan modifications from mortgage servicers during the month according to HOPE NOW, a non-profit alliance of mortgage servicers, investors, counselors, and other mortgage market participants.”

“In some respects, “downtown” is a uniquely American invention—considered by die-hard urbanites to be as much a state of mind as a physical location.”

“A new partnership between the Residential Energy Services Network (RESNET) and the Appraisal Institute plans to include Home Energy Rating System (HERS) scores in appraisals.”

“Freddie Mac (OTCQB: FMCC) announced today that it will forgo issuing a Reference Notes® security on its March 20, 2017 announcement date. The company’s 2017 Reference Notes calendar [PDF] designates dates that it may use to announce the issuance of Reference Notes securities.”

“A few blocks may make all the difference in the price you pay for a home in Manhattan and Brooklyn.  Our map, which updates quarterly, shows how values vary by neighborhood, what kinds of deals buyers are negotiating or even whether it makes more sense to rent.”

“House flipping is hot again, with investors flipping property at the fastest pace in a decade. Yet behind their walls, that picture-perfect dream home could conceal a nightmare.”

“You can hype a new home’s hardwood floors and extra storage until you’re blue in the face. But you won’t get nearly the kind of foot traffic as those who tout a home’s green features.”

Bruce Norris will be speaking at 10 Life-Changing Days of a Real Estate Investor with LA South REIA on Monday, April 10.

Bruce Norris will be speaking at 10 Life-Changing Days of a Real Estate Investor with Pasadena FIBI on Thursday, April 20.

Bruce Norris will be speaking at the AOA “Million Dollar” Trade Show & Landlording Conference in Long Beach on Wednesday, May 24.