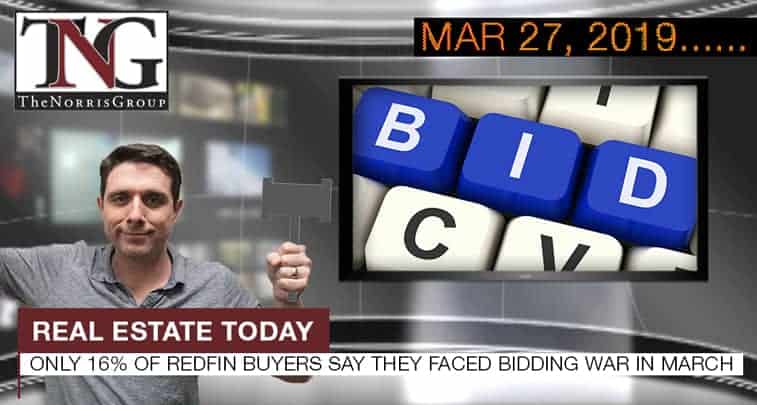 “San Francisco, Boston, San Diego and Portland are the most competitive housing markets this month, but still only one in five homebuyers faced bidding wars—far fewer than a year earlier.”

“Nobel Prize winner Robert Shiller told CNBC that despite a strong housing market since 2012, homebuyers do not seem as excited.”

“Is it mere coincidence or brilliant design choice that Star Wars’s beloved R2-D2 bears an uncanny resemblance to an observatory? Either way, the similarities are undeniable, and this observatory in Zweibrücken, Germany, is all the proof you need.”

“Falling mortgage rates are giving a lift to U.S. homebuilders just in time for the key spring selling season.”

“Mortgage applications increased 8.9 percent from one week earlier, according to data from the Mortgage Bankers Association’s (MBA) Weekly Mortgage Applications Survey for the week ending March 22, 2019.”

“It’s well documented that millennials tend to make different lifestyle choices than baby boomers do, from waiting longer to get married and have children to spending their money on health, wellness, and experiences rather than material goods.”

“President Donald Trump is officially calling for an end to the conservatorship of Fannie Mae and Freddie Mac, according to a White House release issued Wednesday.”

Bruce Norris will be presenting 10 Decisions To Make Before The Next Downturn at the AOA Million Dollar Trade Show on Wednesday, April 17.

Bruce Norris will be presenting 10 Decisions To Make Before The Next Downturn with Pasadena FIBI on Thursday, April 18.

Case-Shiller says home prices were still hot.  Redfin reported a 14.1% decrease on their Housing Demand Index in February, putting it at 110.  There was potential to see an increase in people renting out their homes with the passage of a new tax law.