Now You See Us, Now You Don’t 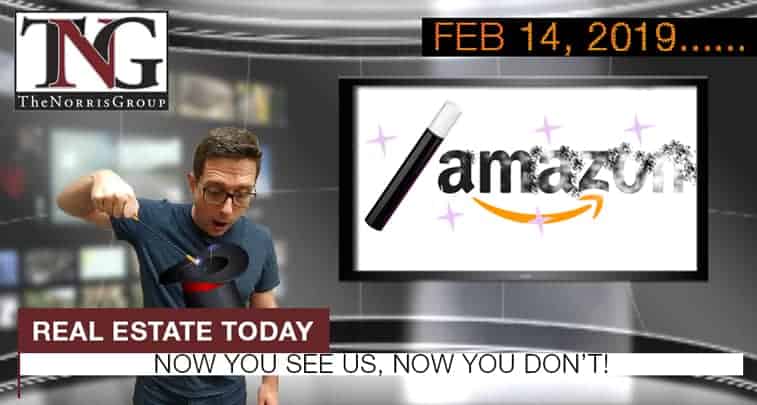 Amazon HQ2 pulls the plug on New York.  Freddie Mac reported fixed-rate mortgages are at their lowest in a year with 30-year rates now at 4.37% and 15-year rates at 3.81%.  Home purchase mortgage applications increased in January, although year-over-year they remained flat.

“A common concern among residential real estate investors is that there are too many people working the same leads. We frequently hear investors say they are having a hard time finding properties that are good for investing.”

“Finally! After years of scraping by in cramped apartments in sketchy neighborhoods, you’ve made it—into a luxury rental with a doorman, concierge service, gym, bike room, and other posh amenities. It seems perfect.”

“To lure house hunters, sellers of high-end homes are slashing prices by as much as 30 percent.”

“After falling for nearly four consecutive years, housing inventory has turned a corner, growing on an annual basis in four of the past five months, according to the January Zillow Real Estate Market Report.”

“ATTOM Data Solutions, curator of the nation’s premier property database, today released an infographic behind an analysis where we uncovered top metro areas across the nation that saw the greatest difference in home value between single men and single women.”

“The rumors are true – Amazon has officially canceled plans to build a headquarters in Long Island City, New York, after facing significant opposition from local politicians who protested tax breaks for one of the world’s more powerful companies.”

Bruce Norris will be giving his latest Real Estate Market Update with MVP on Thursday, February 28.

Bruce Norris will be presenting 10 Decisions to Make Before The Next Downturn with OC FIBI on Tuesday, March 5.

Bruce Norris will be giving his latest Real Estate Market Update with IVAR on Wednesday, March 6.

What was on the horizon for real estate tech?  Fannie Mae just released their results of what the fourth quarter of 2017 looked like.  The Mortgage Bankers Association reported a 4.1% decrease in mortgage applications from the previous week.