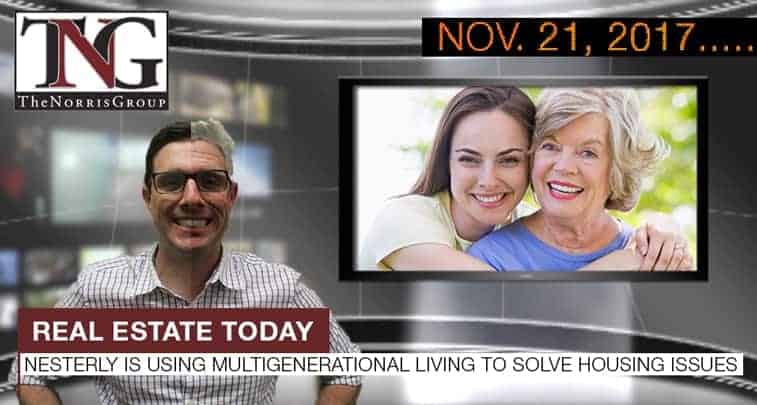 Looks like there’s a new platform that pairs senior homeowners with students.  The National Association of Realtors reported a 2% increase in existing-home sales in October.  The NAHB reported a 10 point drop in the Multifamily Production Index, putting it at 46 in the third quarter of 2017.

“The Multifamily Production Index (MPI), released today by the National Association of Home Builders (NAHB), dropped 10 points to 46 in the third quarter of 2017. This is the lowest reading since the second quarter of 2011.”

“Existing-home sales increased in October to their strongest pace since earlier this summer, but continual supply shortages led to fewer closings on an annual basis for the second straight month, according to the National Association of Realtors.”

“Chinese authorities have said they will head off the risk of a property market crash by stiffening regulation and preventing high land prices.”

“Freddie Mac (OTCQB: FMCC) today released its monthly Outlook for November, which analyzes the factors that have the housing markets on track for their best year in a decade by a variety of measures.”

“The real-estate industry is taking its first steps in adopting cryptocurrencies and the technology that backs them in what could eventually produce important changes in the way property is bought and sold.”

“When the economy is humming along that’s when you’ll see more venture capitalists come out of the woodwork. In many markets, it’s been awhile since the real estate industry attracted VC attention. But times — they are a-changin.'”

“Nesterly, a new platform that pairs older homeowners with young renters, is riding a wave of interest in multigenerational living.”

“Your front door color may need some freshening up— you probably know that it’s crucial to boosting your home’s value.  But before you reach for the paint, know that your choice of front door colors might tell perfect strangers quite a lot about who you are, and there are specifics to feng shui front door colors that you might want to take into account.”

3.4 million single-family investment homes in the U.S. were owned by investors outside of their home state, and a lot of them were homes in red states being owned by investors from blue states.  Fannie Mae released their latest 2016 Economic and Housing Outlook, showing they expected to see growth continue at a normal level despite not knowing what regulatory decisions would be made.  The CFPB filed to have a rehearing on a recent ruling in October regarding the organization not being constitutional.