Maybe The “Flier Bandit” Got You 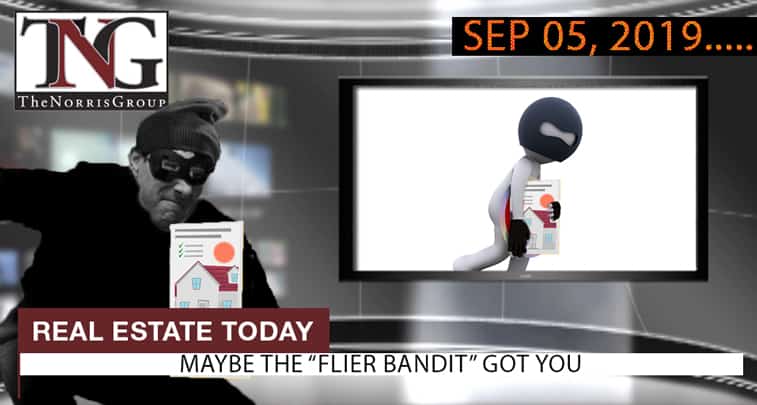 Is your house not selling?  Freddie Mac reported mortgage rates decreased this week with 30-year rates now at 3.49% and 15-year rates at 3%.  The new plan for the GSEs is expected to be revealed very shortly.

“Freddie Mac (OTCQB: FMCC) today released the results of its Primary Mortgage Market Survey® (PMMS®), showing that the 30-year fixed-rate mortgage (FRM) rate averaged 3.49 percent, the lowest it has been since October 2016.”

“In the decade following the Great Recession, job growth has been disproportionately concentrated to the largest U.S. job centers, and home values in these markets have risen accordingly.”

“Economic activity increased in the U.S., according to the latest “Beige Book” from the Federal Reserve.”

“Nick Bailey, most recently the former president and CEO of Century 21 Real Estate, has rejoined previous employer RE/MAX in a newly created position.”

“Some real estate agents in the county are trying to stop a “flier bandit” who has been emptying out brochure boxes from homes listed for sale.”

“The Trump administration’s blueprint for reforming the U.S. housing system is expected to be unveiled in the coming days, according to Washington analysts, marking a key step toward overhauling mortgage giants Fannie Mae and Freddie Mac.”

Bruce Norris will be presenting his latest talk 10 Decisions To Make Before The Next Downturn with SDIC TONIGHT.

Which room should be the best staged if you want that house sold?  You might be surprised by the number of homeowners who regretted the neighborhood into which they moved.  America was seeing the highest number of bankruptcy filings from people older than 65 than ever in history.