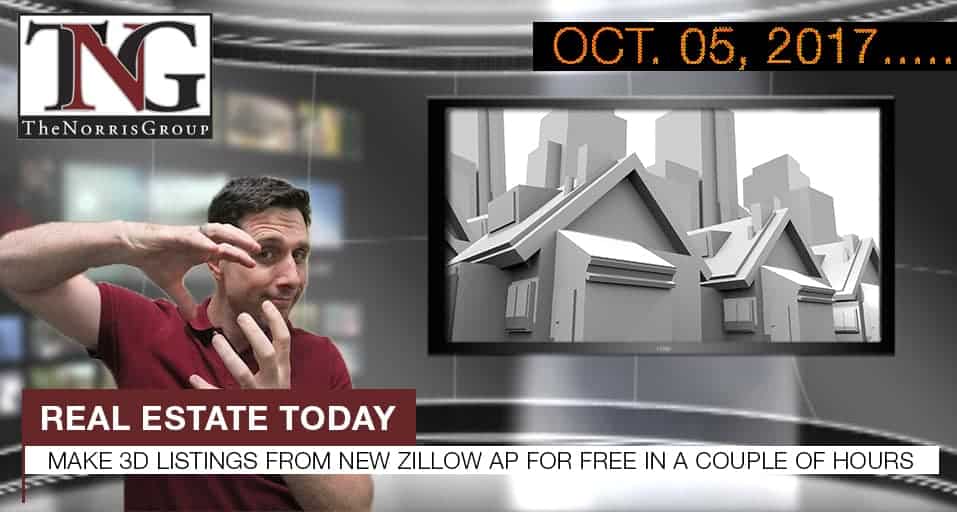 Zillow Group will 3D homes to Real Estate Listings for FREE!  Home affordability improved in the third quarter in 60% of U.S. markets according to ATTOM Data Solutions.  Mortgage rates increased to their highest in six weeks with 30-year rates at 3.85% and 15-year rates at 3.15%.

“Zillow today announced plans to bring 3D Homes to for-sale and for-rent listings, providing home searchers with a new and more immersive way to envision themselves in a home.”

“ATTOM Data Solutions, curator of the nation’s largest multi-sourced property database, today released its Q3 2017 U.S. Home Affordability Index, which shows that home affordability in the third quarter improved compared to the previous quarter in 60 percent of 406 U.S. counties analyzed in the report — although affordability was still worse off than a year ago in 79 percent of those counties.”

“Mortgage applications decreased 0.4 percent from one week earlier, according to data from the Mortgage Bankers Association’s (MBA) Weekly Mortgage Applications Survey for the week ending September 29, 2017.”

“The National Association of Home Builders changed its stance on one of the most highly debated homeownership conversations: the importance of the mortgage interest tax deduction.”

“The lack of affordable housing in America’s fast growing cities is reaching epic proportions as more and more families are being priced out of homeownership.”

The Mortgage Bankers Association reported a 2.9% increase in mortgage applications according to their latest survey.  Non-performing loans totaling $1 billion were just sold by Freddie Mac, most bought by private investors with whom they worked.  In light of the recent scandals with big banks, the Federal Reserve Board and the Federal Deposit Insurance Corporation posted the new goals submitted by the banks in their revised “wills.”