Just Leave It By The Door. No, No, Just Inside The Door 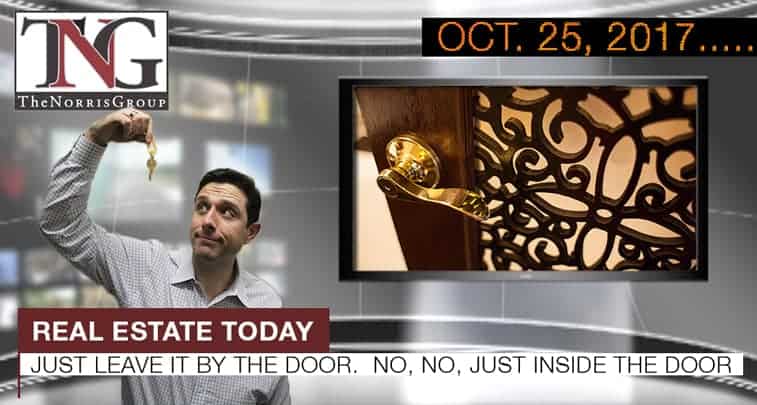 Amazon wants to let themselves in, with your permission of course.  New home sales increased 18.9% in September while pending sales decreased for the third straight month by 6%.  More and more people are choosing to rent as they are finding it more affordable.

“New research released today by Freddie Mac (OTCQB: FMCC) indicates that affordability and changing attitudes towards renting are playing a significant role in the growing demand for rental housing.”

“After a disappointing summer, new home sales roared back in September to record their best month in almost a decade.  September new home sales jumped 18.9 percent from August, to 667,000 units at a seasonally adjusted annual rate (SAAR), according to the U.S. Census Bureau.”

“Mortgage applications decreased 4.6 percent from one week earlier, according to data from the Mortgage Bankers Association’s (MBA) Weekly Mortgage Applications Survey for the week ending October 20, 2017.”

“California pending home sales dwindled for the third consecutive month, suggesting that the housing market will slow as the end of the year winds down, the CALIFORNIA ASSOCIATION OF REALTORS® (C.A.R.) said today.”

“Amazon’s steady encroachment into every corner of our lives has reached a new phase: now Jeff Bezos and co. want the keys to our homes.”

“Four reasons are often given for housing’s labor shortage, now much more acute in the wake of three destructive hurricanes that ripped through the Caribbean, Florida, and Texas, and a wildfire conflagration that blasted California, north of San Francisco.”

“Sure, most of us love scrolling through photos of adorable tiny houses—but not everyone is quite as enamored of the tiny living movement.”

The latest home price index from S&P/Case-Shiller showed home prices in the U.S. increased 5.3% in August.  The FHFA also released their home price index, which showed a 5% increase in home values, putting them at their highest since their peak in 2007.  The latest forecast from the Mortgage Bankers Association reported purchase originations to reach $1.1 trillion the following year.