Is It Taxes, House Prices…Are You Mad At Me? 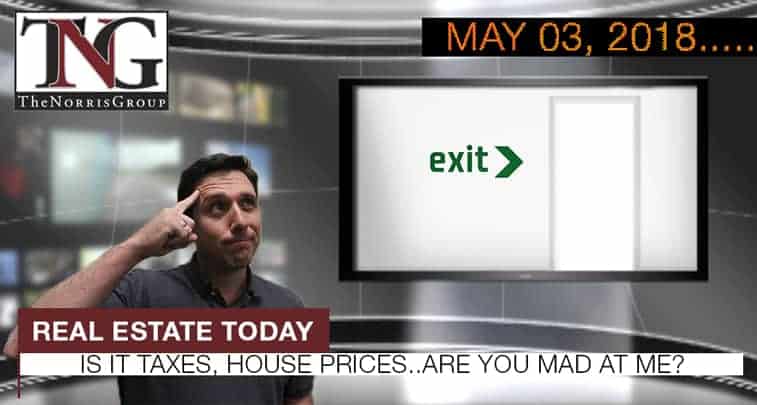 Hey Californians. Where you going?  The NAHB reported builder confidence for the 55+ housing market continued to stay strong in the first quarter at 71.  ATTOM Data Solutions released their latest report on home equity and underwater properties, showing they were down 291,000 from last year while equity growth was slower.

“Builder confidence in the single-family 55+ housing market dropped five points to 66 in the first quarter of 2018, according to the National Association of Home Builders’ (NAHB) 55+ Housing Market Index (HMI) released today.”

“ATTOM Data Solutions, curator of the nation’s premier multi-sourced property database, today released its Q1 2018 U.S. Home Equity & Underwater Report, which shows that at the end of the first quarter of 2018, more than 5.2 million (5,206,446) U.S. properties were seriously underwater (where the combined balance of loans secured by the property was at least 25 percent higher than the property’s estimated market value), down by more than 291,000 properties from a year ago — the smallest year-over-year drop since ATTOM began tracking in Q1 2013.”

“The cost of Airbnb to New York renters: $616 million.  That’s the conclusion of a new report by city Comptroller Scott Stringer that details the home-sharing website’s impact on housing affordability from 2009 to 2016.”

“Freddie Mac (OTCQB:FMCC) today released the results of its Primary Mortgage Market Survey (PMMS®), showing that after steadily rising in most of April, average mortgage rates dipped slightly over the past week.”

“Much has been said in recent months about the mounting housing affordability crisis in the U.S., including blaming it for holding back home sales, suggesting how U.S. Department of Housing and Urban Development Secretary Ben Carson can solve the crisis and even questioning if President Donald Trump’s trade war will worsen the crisis.”

“City Council approves proposed rules to bar Airbnb-type listings of dwellings that are not a primary residence.”

“Say goodbye to Hollywood, Billy Joel sang in 1976.  Now, in the midst of a deepening housing crisis, thousands of people are following that advice.”

Bruce Norris will be speaking at the 2018 AOA Million Dollar Trade Show and LandLording Conference on Tuesday, May 15.

Bruce Norris will be presenting Stay Put or Cash Out with HomeVestors on Wednesday, May 23.

Bruce Norris will be presenting Stay Put or Cash Out with the San Diego Investment Club on Thursday, June 7.

The Mortgage Bankers Association reported mortgage applications decreased by only 0.1% from the previous week, while refis decreased 5%.  Trulia reported the value of homes was actually less now than they were prior to the Crash.  The Federal Reserve decided once again to hold off on increasing rates.