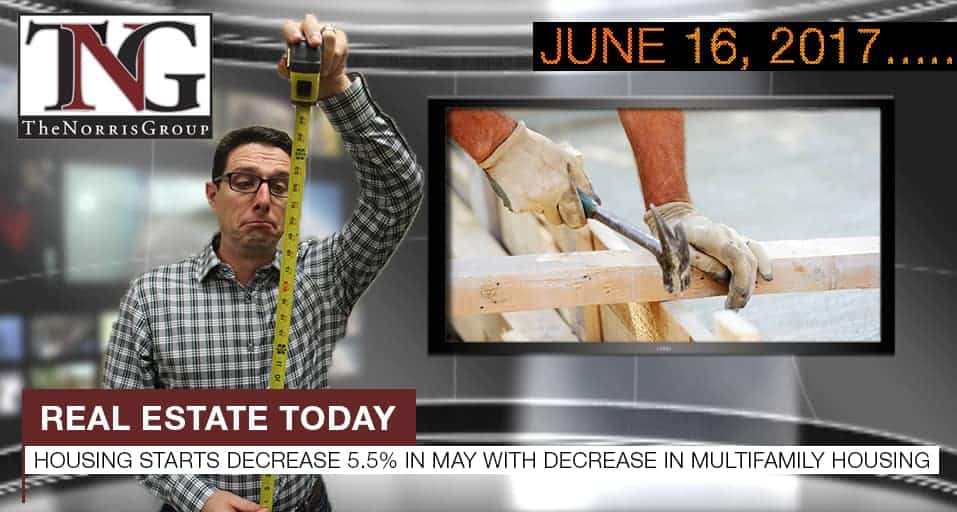 Aaron Norris of the Norris Group gives this week’s Norris Group real estate headline roundup.  Housing starts decreased 5.5% last month with the decrease in multifamily housing.  Both home prices and rents are showing signs of increase alongside increasing demand and tight supply.  A new kind of co-living situation is becoming popular with strangers signing a lease to live in the same building.

“Led by a decline in multifamily production, nationwide housing starts fell 5.5 percent in May to a seasonally adjusted annual rate of 1.09 million units, according to newly released data from the U.S. Department of Housing and Urban Development and the Commerce Department.”

“A traditional grocery store might not be the safest tenant in town, after all.  Real estate investment trusts, or REITs, are taking another beating in the equities market Friday following news that Amazon has plans to acquire Whole Foods.”

“For further evidence of the uneven recovery among U.S. housing markets, how’s this: In the 10 most expensive U.S. metropolitan areas, median home values have increased by 63 percent since 2000, after adjusting for inflation.”

“A decade after the onset of the Great Recession, the national housing market has, by many measures, returned to normal, according to the latest State of the Nation’s Housing report, released today by the Joint Center for Housing Studies of Harvard University.”

“Upper-middle-class families are more likely than low or upper-class families to rely on their extended family for childcare, according to the Zillow® Housing Aspirations Report.”

“If you’re joining the hordes and attending a wedding or two this hot season, chances are good you’ll be toasting at least one happy couple in their very own home—or maybe the home of a family member.”

“The “social” generation is poised to disrupt another industry. The same way that the car scene changed with Uber and NYC offices started going virtual, co-living is coming to a neighborhood near you.”

The NAHB reported builder confidence rose two points this month to 60.  The housing market saw tremendous growth with home prices rising 4.3% and sales 7%, their fastest pace ever.  Purchases of closed loans was above 60% according to Elllie Mae, the first time in almost a year.