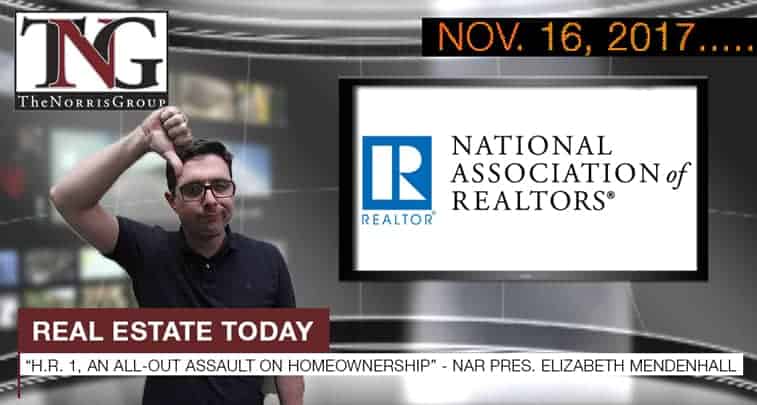 National Association of Realtors will take their case to the Senate.  The NAHB reported builder confidence increased two points to 70 this month, putting it at its highest in 8 months.  ATTOM Data Solutions reported seriously underwater properties decreased by 1.4 million from last year in the third quarter of this year.

“Owning a home may help you save money, but it won’t help you make money.  Households are better off taking control of their finances than relying on fluctuating home values.”

“Home price growth was strong in October, up 7.6 percent compared to a year ago to a national median sale price of $288,000 across the markets Redfin serves.”

“ATTOM Data Solutions, curator of the nation’s largest multi-sourced property database, today released its Q3 2017 U.S. Home Equity & Underwater Report, which shows that at the end of the third quarter of 2017 there were 4.6 million (4,628,408) U.S. properties that were seriously underwater (where the combined loan amount secured by the property was at least 25 percent higher than the property’s estimated market value), down by more than 800,000 properties from the previous quarter and down by more than 1.4 million properties from Q3 2016 — the biggest year-over-year drop since Q2 2015.”

“The House of Representatives today passed H.R. 1, the “Tax Cuts and Jobs Act,” a bill National Association of Realtors® President Elizabeth Mendenhall has called an all-out assault on homeownership.”

“Builder confidence in the market for newly-built single-family homes rose two points to a level of 70 in November on the National Association of Home Builders/Wells Fargo Housing Market Index (HMI).”

“Entrepreneurs are starting business niches to help the growing number of baby boomers who are moving their aging parents, The Wall Street Journal reports.”

“Each year, business magazine Forbes honors young visionaries in an array of fields with its annual 30 Under 30 list.  The 2018 list, released this week, is teeming with young minds set on creating cutting-edge products to disrupt the real estate industry.”

San Francisco put a limit to how long rooms could be rented out through Airbnb at 2 months.  The Mortgage Bankers Association reported a 9.2% decrease in mortgage applications from the previous week.  The NAHB reported homebuilder sentiment at 63, up slightly from the previous month.