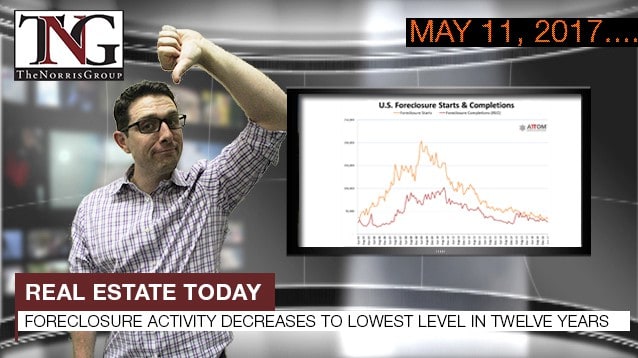 Freddie Mac reported mortgage rates continue to hold steady with 30-year rates at 4.05% and 15-year rates at 3.29%.  ATTOM Data Solutions reported foreclosure activity decreased 7% month-over-month and 23% year-over-year to its lowest in 12 years.  Housing affordability increased slightly in the first quarter with 60.3% of homes being affordable between January and March.

Realtor.com – “Off the Grid: A Groundbreaking Community That Produces as Much Energy as It Uses” (5-11-2017)

“Richard Bruce is looking forward to moving into his new Austin, TX, home with his wife by year’s end. When construction is complete, the 1,700-square-foot abode will have three bedrooms, two bathrooms, plus the lightning-fast Google Fiber internet service.”

“Investors and the Federal Reserve may have grown too comfortable with gradualism — raising interest rates at a pace that is not too fast, not too slow, but just right.”

“ATTOM Data Solutions, curator of the nation’s largest multi-sourced property database, today released its April 2017 U.S. Foreclosure Market data, which shows foreclosure filings — default notices, scheduled auctions and bank repossessions — were reported on 77,049 U.S. properties in April, down 7 percent from the previous month and down 23 percent from a year ago to the lowest level since November 2005.”

“Rising wages and moderating home prices offset a rise in mortgage interest rates to give housing affordability a slight boost in the first quarter of 2017, according to the National Association of Home Builders (NAHB)/Wells Fargo Housing Opportunity Index (HOI) released today.”

“Call it a local bond market buffet.  American buyers have been gorging on corporate debt after also stepping up their presence in the Treasury market.”

“After several years of rapid growth, the market for luxury real estate across the globe appears to be cooling off.”

Mortgage applications increased but not by much at 0.4% according to the Mortgage Bankers Association.  The White House announced plans on this day to focus on building more communities that would hold up better against difficult life circumstances.  The latest Equifax National Consumer Credit Trends Report showed mortgage write-offs would be at their lowest in 9 years.