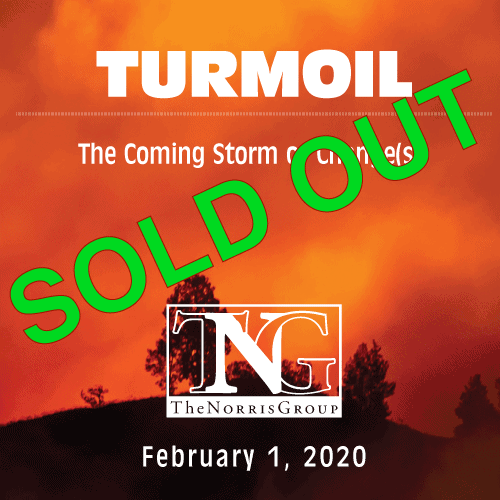 What does changing interest rates mean for real estate? Another round of price increases? Or, will politics in California squash a boom and usher in a bust? We warned investors last year we were on “borrowed time.” Now, Bruce shares what he expects for 2020 and beyond for California real estate in this all-day timing seminar in Riverside, CA. All-new chapters and insights for 2020 and beyond.

We’ve added as many seats as we can and we sold out Thursday. To be placed on a last-minute cancellation list, please contact Joey Romero 951-823-8266.

Below is the economic newsletter. Typically only available to our VIP Subscribers, we open it up to cover Q4 2019 data as well as some of the new items we plan to cover in our first hybrid event, Turmoil: The Coming Storm of Change(s), coming up February 1st. Download this quarter’s newsletter and enjoy the show. Registration for Turmoil is towards the bottom of this page.

From the desk of Bruce Norris:

Many years ago, I was sitting in front of a couple, making an offer to buy their home. During our meeting, I began to feel that I was in the presence of pure evil. You know, that 6th sense where the hairs on your neck stand up? I had never experienced that before. I bought the house and the next week I began working on it.

A couple of days later, the mailman comes to the door with a certified letter. He looked at me and said, “So, you’re the new owner?” I said, yes. Then he said, “The guy you bought the house from just died. He was on his motorcycle carrying a pipe bomb, and it went off!”

This seems like a strange way to introduce you to our new real estate seminar, “Turmoil,” that we’re hosting in Riverside on February 1, 2020.

Looking at our favorite charts, we have plenty of great things happening. We have a 50-year low unemployment rate, low foreclosures, record-low interest rates, and our affordability chart is nowhere near previous lows. Yet, I’m starting to get that same uneasy feeling like I was in front of that seller. The hairs on my neck are standing up.

“Turmoil” will be different from any other timing seminar we’ve ever done. For the first time, we’ll be comparing Florida data alongside California. Together, we’ll discover how the cycles in Florida differ from California. We’ll even be able to drill down to specific areas and look at their history.

Between what I am building and what our investors are building, we are building almost 100 houses. Half of the conversations we take from investors looking to move money out of California are looking to avoid a downturn. The other half? Politics. I’m considering buying a residence in Florida.

Multiple issues can impact real estate prices outside of real estate. In previous reports, we’ve included a “Wild Cards” chapter exploring black-swan events that could spill over into our world of real estate. Well, here’s why I’m on edge and topics we’re exploring:

California’s lopsided political climate has our industry nervous. In 2018, Proposition 10 sought to overturn Costa Hawking’s (rent control). It was soundly defeated with 62% of voters rejecting the repeal.

Yet in October, we passed rent control, not by popular vote, but by our state legislature and signed by Governor Newsome.
What other bills might pass that could impact our industry without the vote of the people?

A vote on proposition 13 is likely coming in 2020. I believe it will pass, likely tripling my commercial building taxes. If it doesn’t pass, I wonder if our state legislature will declare an affordable housing emergency and implement it as they have with rent control. I’m sure the real goal is to do away with Prop 13 altogether.

There are plenty of issues that come with big price tags. Historically, real estate and the wealthy are where California, directly and indirectly, finds the dollars to backfill underfunded pensions, infrastructure, transportation, healthcare for non-citizens (SB-104 passed 7/2019), and other affordable housing initiatives (see $1.2 billion for affordable housing report via LA Controller).

The California Franchise Tax Board shows that almost 50% of the state’s taxes are paid by 150,000 households. I’m one of those 150,000 considering whether the cost is worth it anymore. Trump tax changes don’t allow state taxes to be written off against federal taxes. Many of us are looking into other states calculating the savings and it isn’t small. We shouldn’t be surprised when we learn we lost more than a few of those 150,000 paying the most to other states in the next few years.
To be fair, it isn’t just the wealthy under attack. The biggest loser of the 18 real estate related bills that passed in October were municipalities. The state effectively stripped their local control deeming affordable housing too essential to continue to get locked up in local NIMBY politics. You should expect more pressure on real estate via affordable housing and homelessness initiatives.

As we approach the end of this latest and most prolonged economic recovery, the Fed has done some things it has never done before. Even with record-low unemployment, the Fed has started lowering the Fed fund rate.

Why? Increases have never occurred during full employment. Typically, when signs point to a faltering economy, the Fed begins to lower interest rates. Historically, by about 5%, which boosts the economy. When the lowering of interest rates isn’t solving the economic problem, the Fed can implement quantitative easing to add liquidity to the market.
Typically used as a tool of last resort, the Fed has already pumped billions of dollars into the repo market. It’s still unclear as to why it’s the lender of last resort to the repo market. What happens if quantitative easing isn’t enough to revive the economy? The next step is directly giving what Ben Bernanke called “helicopter money” – providing money to citizens directly. Now, what if that doesn’t work?!

Modern Monetary Theory suggests that governments that create its own supply of currency (like the dollar) can never run out of money (just print more). The implementation of this theory would be vital if, as a country, we decide to proceed with any of the following:

According to Modern Monetary Theory, you can have it all! Do you feel the hairs on your neck standing up? Anyone of these items, if implemented, could easily spill over into the real estate market.

I have a relative who wrote a 100-page book on climate change. I read it on vacation while watching people across the globe holding heartfelt extinction rallies.

The recent Congressional election ushered in such ideas as The Green New Deal, which seeks to severely reduce our reliance on fossil fuel, limit flying, and reduce greenhouse gas emissions. There is little the two trillion-dollar Green New Deal wouldn’t touch in our economy.

The shortest chapter in my relative’s book was the very first chapter having to do with the science behind climate change. It said that 97% of all scientists agree that climate change is human-made and is potentially a global catastrophe. If the reader couldn’t agree with the experts, nothing in the book would change the reader’s mind.

Subscribing to “canceled culture”– the term used for being shut down and publicly ostracized for going against publicly accepted norms – is dangerous. When it comes to financial wealth building, we don’t have the luxury of ignoring things like climate change, global conflicts, technological advances, and the litany of global issues that potentially impact our economy and therefore our industry.

Every time I write a report, the last chapter waits till I’ve completed my research. I challenge every former conclusion on my way to that last chapter. Every time!
We’ve sold millions of dollars of timing reports. Attendees understand our research is done with integrity and without agenda. The sincere question I will always try to answer is: “What is Bruce going to do with his money.” I provide you all the sourced research so you can even go on your own research adventure.

One of my favorite finance people to learn from is Ray Dalio. From him, I learned the concept of “Idea Meritocracy.” It is a tool they use at the company he owns, Bridgewater Associates, the most successful hedge fund over the past 20 years. Ray is a multi-billionaire and is the 58th wealthiest person in the world.

The concept means, “Lay all of the cards on the table, look at the problem from every angle, consider every idea, allow participation from both sides of the table and let the best solution emerge from this process.”

There will be several new chapters that won’t seek to challenge the validity of the issue, but instead, explores the economic ramifications of implementing specific policies with a short time fuse and where that financial impact will land. What will it cost? Where will it cost? How will state vs. federal conflict possibly impact migration? Will it impact your portfolio?

What I have come to understand about the genius of capitalism is that if we believe we’ve got ten years to avoid a catastrophe, we can do that. However, I would like to know the price tag. I want to comprehend the reasoning for the short fuse. I would like for the hair on my neck to stop standing on end.

There are some technologies critical to global competitiveness like 5G internet speeds. This next-generation internet speed is 10 to 100 times faster than current 4E speeds and will drastically impact several industries. Prioritizing the needed infrastructure will be costly, political, and take time. And, the United States is behind.

We’ll explore what emerging technology trends mean for our country in comparison to other countries that already have the technology deployed. And, how that impacts migration habits, demographic living expectations, and things like education.

We’ll cover all our typical charts and chapters, giving you up-to-date data on the things we follow the most including affordability, interest rates, sales, median price, and construction (to name a few).

We’ll have several guest experts talking about regulation and legislation about to go into effect in 2020 like changes to title 24, accessory dwelling units, rent control, as well as upcoming bills landing at one of the most contentious election cycles in history.

We often say our timing work is the “When to” that educates much of our training on “How to” do the real estate business.

This year, we’re adding a touch of “What to” and “Where to” because issues outside of our typical scope will impact our businesses in the years ahead.

We’re excited to add heavy comparisons to Florida to show you different economies and political environments far more friendly to investors, businesses, and landlords. And, at a very different price point.

Yes, we are still lending in California. No, we haven’t sold all our rentals. However, we’ve been strategic in looking across our portfolios and want to help more investors make thoughtful decisions in 2020.

P.S. I highly suggest you join us for what will be a crucial strategy session!