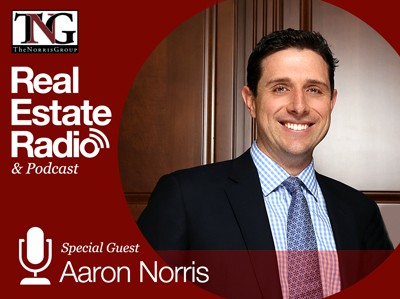 Bruce Norris is joined this week by his son and Norris Group Vice President, Aaron Norris.

Bruce Norris is joined this week by his son Aaron Norris.  Aaron is Vice President of The Norris Group. His role at The Norris Group includes investor relations, business development, community outreach, marketing, public relations, and special events. Aaron has been in the real estate field for over a decade having worked in the construction design industry before joining The Norris Group in 2005. Aaron speaks nationally on topics ranging from marketing and technology trends to technology and its effects on real estate.

Aaron hosts the weekly award-winning Real Estate Headline Roundup Vlog as well as produces The Norris Group’s award-winning radio show and podcast. He’s also the creator of The Norris Group’s series, “I Survived Real Estate,” which has raised over $785,000 for charity since its inception in 2008. Aaron serves on several local nonprofit and professional association boards and is actively involved in the community in efforts like Give BIG Riverside County (founding team member). In total, Aaron has been directly involved in raising almost $2 million for charity since 2008 with initiatives like Give BIG Riverside County and I Survived Real Estate.

Aaron has an MBA from UC Irvine with a focus in marketing communications. He’s an Accredited Public Relations professional (APR) and also holds his Certified Specialist in Planned Giving (CPSG) designation. He’s also a Realtor and Mortgage Loan Originator.

He’s part of the Webby-nominated The Cocktail Party Statement podcast which dissects business and marketing books to their core message for listeners.

If you’re in the Inland Empire, tune in live to KTIE 590am. Or you can listen to the show on your favorite podcast service.