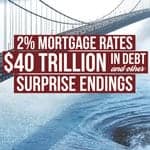 2% INTEREST, $40 TRILLION IN DEBT, AND OTHER SURPRISE ENDINGS SOLD OUT

Bruce Norris shares his latest prediction in this all-day seminar to help our network look forward to what’s ahead in 2017 and beyond.

The Norris Group turns 20 years old this month! As a little THANK YOU for supporting our work, we opened up this quarter’s newsletter to our entire network. Below is the webinar we held on Wednesday, January 25. In it, Bruce covers the chapter “Wild Cards” from the report, this quarter’s affordability numbers by county, and he also walks attendees through the chapters of our upcoming report and why he’s covering the topic.

THE LIVE EVENT IS SOLD OUT!

This was the only way we could see this being fair and to ensure we had serious individuals wanting to attend. Regardless, after the live event, we will be shipping the report and then giving all attendees and those that ordered the report access to the video and audio which we try to get up the next week. Thanks for your SUPPORT!

Strange times we are living in as investors. Figuring out what’s next has never been more difficult. What we have experienced in the last few years has been the effects of monetary policies unthought of and unheard of until now.

For about eight years, the Fed fund rate has been nearly unchanged and below 0.5% interest. That has allowed asset prices to grow beyond reason in some cases. It has altered what people will invest in as they chase yield. It has altered monetary policy because it is so inexpensive to borrow money. Why not create or borrow tons of it?

As yield on investments decreases, the assets that produce income have exploded in value. I recently spoke at an apartment association event. About 600 people crowded into the room to hear what I had to say. Many people had no seat and stood the entire time. Why were they there?

I asked: “By the size of the audience, you are either really excited about what’s going on or really concerned about what’s next.” What followed was a little bit of laughter and then silence. Finally, when it was completely silent, there was a question: “Do we have a price bubble in apartment buildings?”

I’m standing in front of 600 people, many who wanted an answer to that question. I thought the best possible answer would come from them, so I asked, “How many of you would buy your own apartment building at its current valuation?”

What followed was very revealing; sort of like a kid that got caught with the hand in the cookie jar. There was a wave of laughter from one side of the room to the other. I could almost hear them saying, “Yeah, we know this stuff is over-priced and hell no we wouldn’t buy it!”

600 went home that day and did what? They own an over-priced asset and fully agreed it was the truth. Will they sell their over-priced asset before the reason for the over-valuation changes? Of course not! That’s not what we usually do.

Most of the time, I write reports with a look into the future a few years out. This upcoming report will differ in that it will take a look out over the next eight years. About the length of the next two presidential terms!

There are decisions that must be made in the next few years or the trajectory of debt will be irreversible. I’m not convinced that the tough decisions will be made, so we will play several scenarios out eight years and see where we land. To me, that will have everything to do with where it will be safe and profitable to put money.

We’ve witnessed new blueprints on how to handle market crisis over the past eight years. In 1990s, lenders were forced to begin foreclosure on a property after the borrower was 90 days late. In 2008, we didn’t foreclose at all (extend and pretend).

If you looked at the most damaged state for upside down owners at the peak of the crash, Nevada would have been the clear winner. Some 75% of owners were upside down with no hope in sight for their prospects improving. Homes were selling for 20% of loan value as REOs or trustee sales.

Then, a new policy arose. Simply, don’t foreclose, wait! State laws made it very difficult to foreclose and many people just sat there, not making a payment and still occupying a property. Unmotivated to sell at a loss and not being forced to do anything, the owner occupants just stayed and stayed.

Eventually, an interesting thing happened. The economy improved and people moved to Nevada to get jobs. This put increased demand on the real estate market. However, the owner still couldn’t sell so there weren’t enough homes to meet demand and prices began to rise. To meet the inventory shortage, builders actually began to build new housing tracts!

It was the strangest phenomena! The new construction projects caused more migration and amazingly, in 2016, Las Vegas has a building boom. Prices are back up and it was as phony as a three dollar bill. But, alas, it worked!

That blueprint is playing out all over the world. On the backs of creating money from thin air, with interest rates so low they actually create revenue for the borrower, there seems to be no end to the debt expansion. Maybe the world has discovered the secret of solving financial crisis…the ultimate kicking the can down the road formula!

This report will attempt to play out two scenarios; one where caution is thrown to the wind and one where calmer heads prevail. It will contemplate the outcome for real estate prices if we have a 2% mortgage rate or if we have a 7% rate. It will contemplate the national budget cuts necessary to have a fiscally sound future (which means broken promises) and we’ll look at the national debt under the scenario of throwing caution to the wind and have it explode during the next eight years.

The next eight years is extremely important. Baby boomers retire at the clip of 10,000 a day and will keep that pace until about 2030. We’ve made a lot of promises to that group and the tab is about to be cashed.

What surprised me was the amount of money high-income earners could collect if you wait until 70. If I wait till I’m 70, my social security income will cost the government $63,272 bucks a year. Wow! That’s like having $800,000 in an 8% trust deed. Double wow! But wait, the yield these days on normal investments isn’t 8%, maybe 3%. That extrapolates to a valuation of my social security at over $2,000,000.

This report will take a look at some of the amazing new “inventions” that will expand the life expectancy way beyond what was originally plotted by the number crunchers when the social security promises were made.

We’ll attempt to look at robotics, self-driven cars, 3D printing and virtual technology that will create huge shifts in the workforce, change the occupancy of commercial space all over the world, and could radically change the cost of building a new house.

By the time we give this report in February, I will have sold the majority of what I had owned in California. We’ll discuss where I went and why.

My hope is that you will leave that day with some exciting new information that will make your future investment decisions safer and more profitable.

By the way, get a seat. The event will sell out and I’m doing it only once and maybe for the last time.