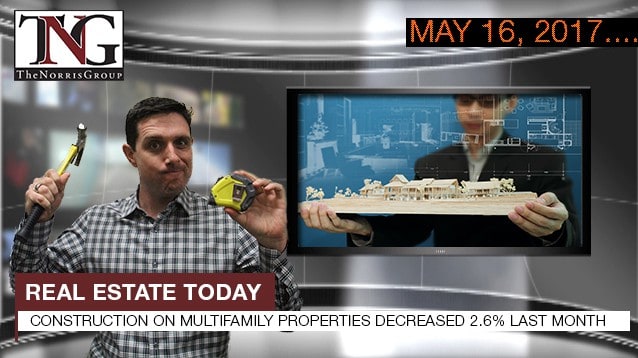 Construction on multifamily properties decreased 2.6% last month according to HUD and the Commerce Department.  Mortgage delinquency rates decreased to 4.71% at the end of the first quarter of 2017 according to the Mortgage Bankers Association.  Fannie Mae released their latest Economic and Housing Outlook, showing they expect the second quarter to pick up following a slow first quarter.

“Led by a decline in multifamily production, nationwide housing starts fell 2.6 percent in April to a seasonally adjusted annual rate of 1.17 million units, according to newly released data from the U.S. Department of Housing and Urban Development and the Commerce Department.”

“The largest generation is finally starting to buy houses. The trouble is, there aren’t enough houses for sale to feed their appetite, at least not enough they can afford.”

“The delinquency rate for mortgage loans on one- to four-unit residential properties decreased to a seasonally adjusted rate of 4.71 percent of all loans outstanding at the end of the first quarter of 2017.”

“When you walk into your home, you want it to feel—for lack of a better word—homey. As such, a hulking metal structure probably wouldn’t score high in a ranking of cozy and inviting homes. However, these massive, industrial-look barns are the housing craze currently sweeping through Texas.”

“U.S. Treasury Secretary Steven Mnuchin has taken pains to stress that the Trump administration isn’t out to kill Americans’ beloved mortgage-interest tax deduction — but a side effect of the plan could turn it into a perk for only the wealthy.”

“Growth expectations for 2017 remain at 2.0 percent, according to the Fannie Mae Economic & Strategic Research (ESR) Group’s May 2017 Economic and Housing Outlook.”

“There’s a time in everyone’s life to save. There’s also a time when you’re supposed to spend. That time is commonly known as retirement.  Millions of Americans aren’t doing that, however, which has put the U.S. in a perverse situation.”

Confidence in home building remained relatively unchanged at 58 according to the NAHB.  Bank of America was finally pushing ahead with the $8.5 billion settlement with Bank of New York Mellon.  Forecasts for mortgage rates put them around 4% according to the Mortgage Bankers Association.