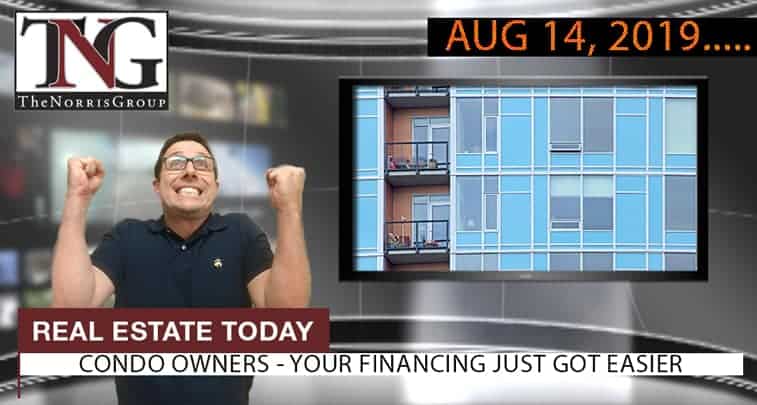 The FHFA just announced changes to its condominium rules to make it easier for owners to finance, news they have been waiting to hear for a long time.  Mortgage debt is at a record-high, even higher than its peak back in 2008.  The Mortgage Bankers Association reported mortgage applications increased 21.7% from last week.

“Mortgage applications increased 21.7 percent from one week earlier, according to data from the Mortgage Bankers Association’s (MBA) Weekly Mortgage Applications Survey for the week ending August 9, 2019.”

“Markets plummeted and fears of a possible upcoming recession loomed as the 10-year Treasury yield fell below the two-year rate for the first time since 2005—an economic marker that has often proved a forerunner of recessions in times past.”

“The Federal Housing Administration has finally issued a long-awaited update to its condominium rules, announcing Wednesday that it will now allow individual unit approval and is taking other steps to loosen requirements that make these properties eligible for FHA financing.”

“U.S. mortgage debt reached a record in the second quarter, exceeding its 2008 peak as the financial crisis unfolded.”

“Suburban life blossomed during the 1950s. In an era of conformity, the similarity of routine from one family to the next made suburban life particularly appealing; the kids had a back yard and a group of friends nearby, easily accessible by bike, the dads had a commuter train, and the moms had housework, coffee dates, lunch dates, dinner dates.”

“More than 40% of Americans have opted out of a getaway over the past year specifically because of the cost, a new study finds.”

“While Wall Street panics about falling rates, Main Street is benefiting, especially in the housing market, according to housing guru Ivy Zelman.”

“This southwest suburban agent’s parody video, designed to impress potential homebuyers, has had more than 500,000 views on his Facebook page.”

Bruce and Aaron Norris will be hosting a Florida Boot Camp in Fort Myers Florida August 15-16.

Bruce Norris will be presenting his latest talk 10 Decisions To Make Before The Next Downturn with InvestClub on Wednesday, August 21.

More than 6 million homes were missing from the U.S. housing market.  Both foreclosure and mortgage delinquency rates were at their lowest in 12 years in May according to CoreLogic.  How much did you need to make in the major U.S. cities in order to live on your own?