California Forecast 2013: More of the same save the black swan by Sean O’Toole 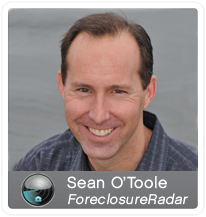 In 2012, we saw the continuation of a housing recovery in California, with solid sales volumes and price increases throughout much of the state.  More importantly, short sales, loan modifications, price increases and even foreclosures helped many get our of being underwater on their homes.  Many would say this recovery is artificial.  And, while there is no question government intervention played a major role, it appears unlikely that intervention will end anytime soon; so the recovery is likely to persist-save the possibility of a black swan.

The biggest change in 2012 was the dramatic decline in foreclosure sales, and as a result, bank owned properties (REOs).  The “foreclosure wave” that many others predicted has yet to materialize in California.  Instead, over the past 12 months, notices of default plunged by 48.9 percent year-over-year, foreclosure sales fell 27.7 percent y-o-y and REO inventories declined 34.9 percent y-o-y.  While we correctly predicted that there would be no foreclosure wave, this decline was steeper and sooner than we expected.

For 2013, we largely expect more of the same.  Demand will remain strong thanks to low interest rates and affordability.  Housing supply will remain constrained, largely due to foreclosure intervention.  Prices will rise, though likely at a slower pace.  But unlike 2012, we expect sales volume will decline due to further decreases in supply.

Supply will remain tight, with the inventory of homes for sale at record lows

Housing prices will rise, but increases will be constrained

The risk of a black swan should not be overlooked

The term “black swan” comes from Fooled by Randomness by Nassim Taleb.  The idea is that rare, unexpected, events are actually the norm, and should be expected.  Today we face a number of risks that no one, including us, expects will happen.  We summarize some of these are here because we believe Mr. Taleb is right, and we should always prepare for the unexpected.

Despite the risks, government intervention, higher taxes, and the other issues that keep up at night, we remain relatively bullish on the housing market for 2013.  We have little doubt that fewer people will be underwater by the end of the year, and that housing will have proven a relatively safer investment than entrusting your money elsewhere.

And no, there will still not be a wave of foreclosures.

See also Sean’s TNG profile page with links to all the radio shows including those for I Survived Real Estate.