Blockchain Is Headed to Real Estate 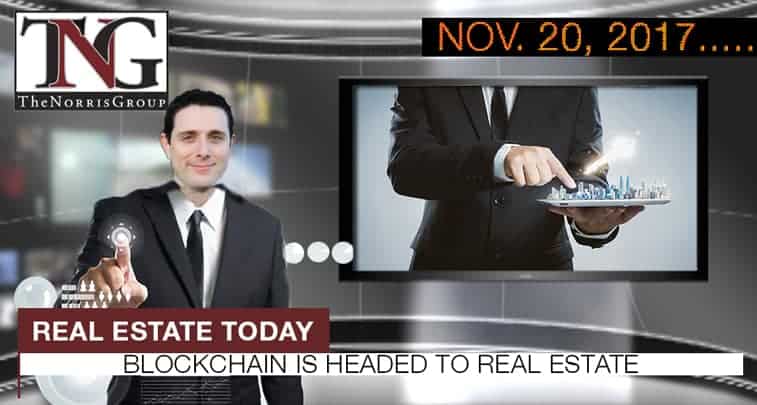 What is the next digital revolution Real Estate?  HUD and the Commerce Department reported a 13.7% increase in housing starts October.  In a shocking story, Janet Yellen announced she will be resigning from the Federal Reserve Board of Governors.

“Nationwide housing starts rose 13.7 percent in October to a seasonally adjusted annual rate of 1.29 million units after a slight upward revision to the September reading, according to newly released data from the U.S. Department of Housing and Urban Development and the Commerce Department.”

“Federal Reserve Chair Janet Yellen announced Monday that she plans to resign from the Fed Board of Governors.”

“Renters will come out ahead, albeit temporarily, if the “Big 6” tax reform framework is passed in its current form. They stand to get about $500 in tax cuts each year.”

“The Greater Las Vegas Association of Realtors will shut off a listing feed to realtor.com next month after negotiations between the trade group and realtor.com operator Move Inc. fell apart, according to a notice sent out to GLVAR’s 14,000-plus members Thursday.”

“After a decade of renting in San Francisco and a brief stint in Los Angeles, Blue and Perez became part of a great migration to one of the last affordable urban areas in the state. Drawn by lower housing prices, Bay Area residents are pouring into California’s capital and its surrounding areas, trading a temperate climate for triple-digit summers; hustle-and-bustle for a slower pace of life; and redwood hiking trails for expansive fields and distant, snow-capped mountains.”

“Black Friday is renowned for its spectacular once-a-year deals, and this time around, several big retailers are kicking off their deals early.”

“Many are banking on blockchain technology to one day transform the business of real estate by moving all aspects of transactions to a digital platform, making them faster, less costly, and more resilient against fraud, a panel of experts said during the 2017 REALTORS® Conference & Expo on Friday.”