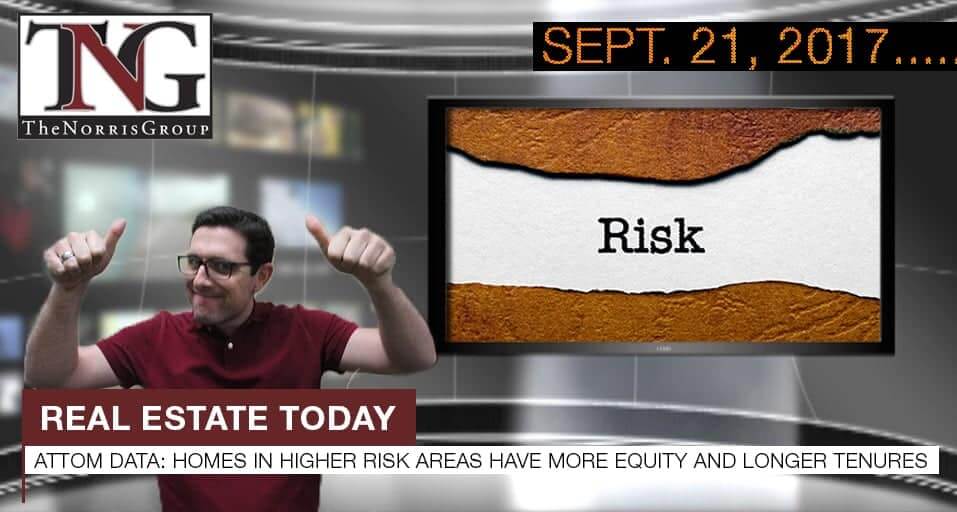 Home prices are rising faster in high natural disaster risk areas.  According to the latest home equity analysis from CoreLogic, the number of homes with a mortgage that is still in negative equity is 2.8 million.  The Federal Reserve has plans to start shrinking their bond portfolio by selling off bonds, although they said to not worry about the low interest rates increasing again.

“CoreLogic (NYSE: CLGX), a leading global property information, analytics and data-enabled solutions provider, today released its Q2 2017 home equity analysis which shows U.S. homeowners with mortgages (roughly 63 percent of all homeowners*) have seen their equity increase by a total of 10.6 percent year over year, representing a gain of $766 billion since Q2 2016.”

“Mother Nature’s fury has been devastating—and deadly—over the past few weeks, with Hurricanes Harvey, Irma, and, now, Maria, as well as two powerful earthquakes in Mexico. And that’s just in North America.”

“The Federal Reserve said Wednesday it will start shrinking its bond portfolio in October following a unanimous vote, but low interest rates could still be here to stay.”

“The aftermath of Hurricane Harvey in South Texas is still very much being felt, and as the first numbers start to roll in on its impact on mortgages in the area, the result is not looking good.”

“Apple released its newest operating system today and with it a promising frontier for real estate apps looking to offer augmented reality (AR).”

“The National Association of Realtors and the American Federation of Teachers have joined a coalition to preserve a federal tax deduction for the state and local taxes that individuals pay, according to a Thursday release announcing the group.”

The Mortgage Bankers Association reported that even in the midst of mortgage-backed securities decreasing, mortgage debt for commercial and multifamily properties continued to increase.  The Federal Reserve decided not to increase interest rates at this time, although the debate was not over yet as they were looking towards the end of the year.  Due to the rising number of RVs owned, developers and homebuilders were jumping on the chance to construct more homes that could house the vehicles.