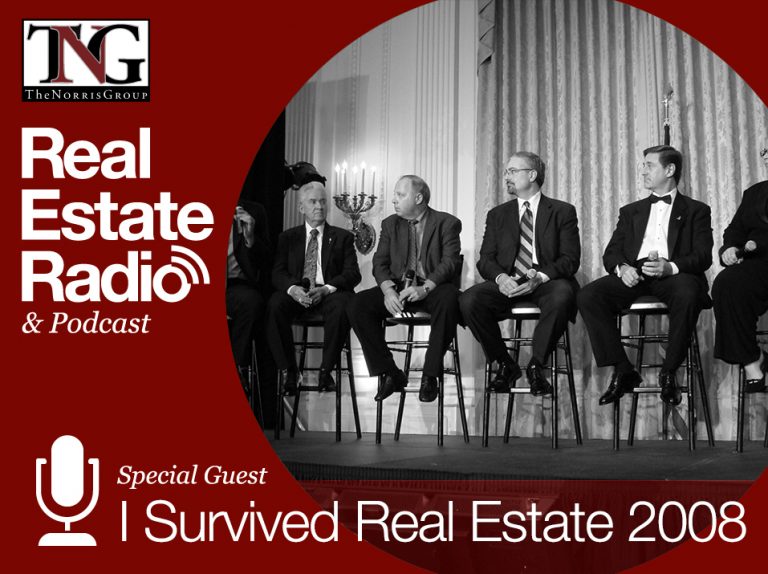 The airing of I Survived Real Estate 2008 continues to air. Video is also available on thenorrisgroup.com.

Part two picks up with Bruce Norris introducing Christopher Thornberg who represents the economics part of the equation. Christopher is a self proclaimed bear and was one of the few that predicted the downturn was coming. Christopher discusses employment, housing starts and how they can only go to zero, consumer sales, exports, his thought on recession and the varying views that exist, if the worst is yet to come, and where he stands.

Christopher talks about the housing market and the false indicator of increases in home sales. Christopher says homes prices got too ridiculous and that prices did not match what people were making. Increases in incomes did not keep up with home price appreciation. The only reason prices got that high was of the crazy financing that took place.

Christopher says the pace of home price declines look to be around 30% per year and the mix of foreclosures to home sales is not looking good. Christopher addresses how far prices will fall.

Christopher believes financial losses will total over $1 trillion and that several institutions will fail because of overexposure. The leverage of some institutions is 100 to 1 such as Fannie Mae and Freddie Mac.

Christopher reviews some of the new features of the newly passed housing bill and how little it will actually accomplish. With the money that the government will release to California alone, doing the math it means California will only be able to purchase around 4,000 homes which is a very small piece of the large REO pie. Allowing banks to revise certain consumers loans. The government actually foots the bill. $140 billion lent to banks but they are still a big mess.

Christopher talks about the tax rebate and how it didn’t increase spending enough. He says the consumers are dealing with two bubbles. Savings rates have gone from 8% to 0% and that a great amount of net wealth disappear. Consumers will be forced to save for the first time and will also be bad for the short run. With contraction in spending, it means a slow down in retail and other consumer-driven sectors. Cocktail statement: Keep you’re eye on 2010.

Rick talks about how we got into the position we’re in; lending. What drove some of the behavior was Fed policy and that money became practically free. People who should never have been able to get a loan got one in the boom. Wall Street securitized these loans and had a voracious appetite to do so. Due diligence was practically thrown out the window. Bankers went from buy and hold strategy to buy, package and sell and do it again.

RealtyTrac captures foreclosure data from 2,200 counties nationwide. 1.2 million foreclosure filings occurred in 2006 and over 2.3 million in 2007. In California the numbers were much worse as a percentage compared to other states. 2008 will be far worse. Rick discusses the areas hit the hardest. He mentions 7 of the top 12 markets hit hardest are in California. In Stockton, 1 in 25 receives a foreclosure notice. Foreclosure homes are outselling the resale of homes at this point. Existing homes sales aren’t increasing like most would think. The resets for subprime will continue. 32 months of foreclosure data increases thus far with no end in sight. Alt A and Option Arms will cause more problems in 2009.

While the market is sure to continue its decline, Rick points out there will be plenty of opportunities for investors in the coming years.