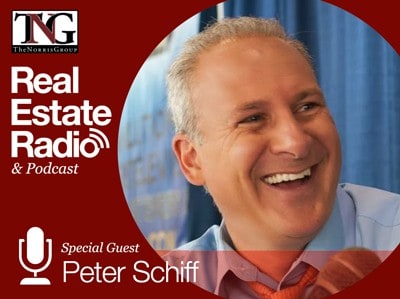 Bruce is joined by global finance expert, Peter Schiff with Euro Pacific Capital. Listen in as they discuss the current market, its effect on the real estate market and the economy at large. This is one of the more negative interviews. First time listeners beware!

Mr. Schiff is one of the few non-biased investment advisors (not committed solely to the short side of the market) to have correctly called the current bear market in U.S. dollar denominated assets before it began and to have positioned his clients accordingly. As a result of his accurate forecasts on the U.S. stock market, commodities, gold and the dollar, he is becoming increasingly more renowned. He has been quoted in many of the nation’s leading newspapers, including The Wall Street Journal, Barron’s, Investor’s Business Daily, The Financial Times, The New York Times, The Los Angeles Times, The Washington Post, The Chicago Tribune, The Dallas Morning News, The Miami Herald, The San Francisco Chronicle, The Atlanta Journal-Constitution, The Arizona Republic, The Philadelphia Inquirer, and the Christian Science Monitor, and has appeared on CNBC, CNNfn, Fox News and Bloomberg. In addition, his views are frequently quoted locally in the Orange County Register.

Mr. Schiff began his investment career as a financial consultant with Shearson Lehman Brothers, after having earned a degree in finance and accounting from U.C. Berkeley in 1987. A financial professional for nineteen years he joined Euro Pacific in 1996 and has served as its President since January 2000. An expert on money, economic theory, and international investing, he is a highly recommended broker by many of the nation’s financial newsletters and advisory services. Mr. Schiff holds NASD Series 4,7,24,27,53,55, and 63 licenses.