“Taking MID Would Be Worthwhile On Only 5% of U.S. Homes” – Zillow 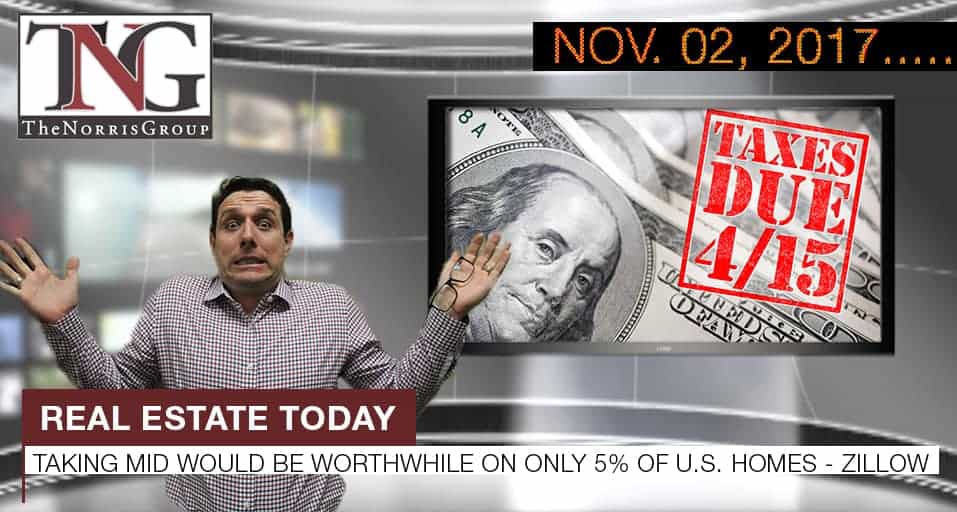 Real Estate industry is weighing in on proposed tax changes.  Housing affordability is at its lowest in ten years according to the California Association of Realtors, down to 28% from the second quarter and 31% in the third quarter of 2016.  Home prices on metropolitan homes increased 5.3% in the quarter.

“Builder confidence in the single-family 55+ housing market continued to be positive in the third quarter of 2017, according to the National Association of Home Builders (NAHB) 55+ Housing Market Index (HMI), released today.”

“America’s popular mortgage interest deduction is about to lose a lot of its punch.  The House Republican tax plan halves the cap on the deduction of mortgage debt for newly purchased homes to $500,000.”

“Severely lacking inventory levels across the country pinched sales growth and kept home prices rising at a steady clip in nearly all metro areas in the third quarter, according to the latest quarterly report by the National Association of Realtors.”

“ATTOM Data Solutions, curator of the nation’s largest multi-sourced property database, today released its Q3 2017 U.S. Home Sales Report, which shows that distressed home sales — including bank-owned (REO) sales, third-party foreclosure auction sales, and short sales — accounted for 12.5 percent of all home sales in Q3 2017, down from 13.5 percent in the previous quarter and down from 14.1 percent in Q3 2016 to the lowest level since Q3 2007.”

“Currently, a little less than a third (29 percent) of all U.S. homes are valuable enough to make taking the Mortgage Interest Deduction (MID) worthwhile for tax filers. Under recently proposed tax changes, that number would fall to just 5 percent.”

The Mortgage Bankers Association reported a 1.2% decreased in applications from the previous week.  The Federal Reserve continued to hint at an increase in interest rates, even as early as the following month.  The first sale on a vacant loan was made by HUD this week, a loan known as the HUD-Held Vacant Loan Sale 2017-1.