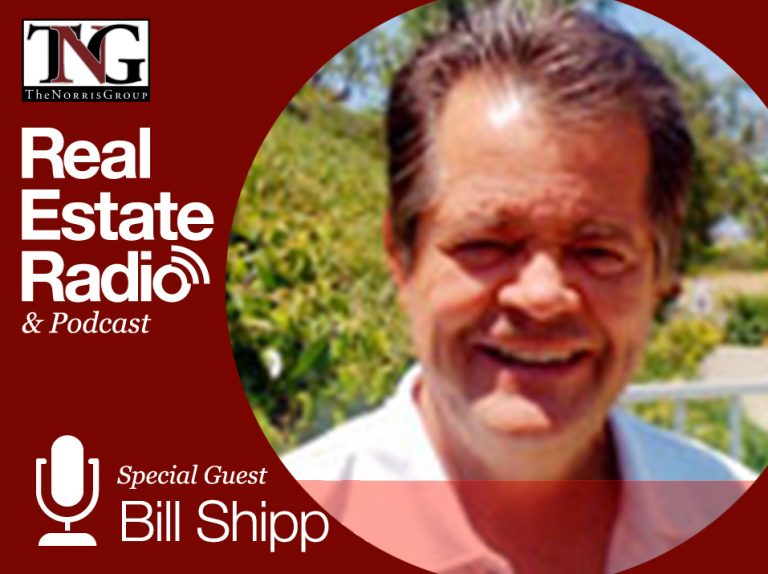 This week Bruce is joined by Bill Shipp. Bill has been investing in Riverside real estate for many years. Bruce thinks Bill is Riverside’s best kept secret.

Bill began flipping homes in 1986. He did his first flip deal when he was 18 years old. He had a family member who had bought the lot but could not afford it, so Bill agreed to buy it for 2,600 dollars and he sold it a couple years later for $6,000.

Before his first real estate investment, Bill was an airforce brat. He moved around a lot which made him wish he could own a house. Prior to 1986, Bill was working a corporate job and strongly disliked it. He had a good friend who was a real estate investor in the Long Beach area. This friend encouraged Bill to learn real estate. Bill’s friend explained that Bill would most likely not become very wealthy if he continued to work in the corporate world, and he would always have to worry about his job security. If you own your own business of buying and selling real estate you can never get fired. This encouraged Bill to quit his job and begin working as a real estate agent.

Bill did learn some important lessons from the corporate world. He learned to run his real estate business the same way as if he was working a corporate job. He did not sleep in just because he owned his own business. He would begin working at 8, and he worked normal hours.

Bill’s mentor taught him how to buy homes, and how to figure out prices and fixing costs. His mentor was very regimented. If Bill was even a minute late, his mentor would leave him. Bill listened to all of his mentor’s phone calls, and he learned how he conducted business with other visitors.

Bill’s mentor never got into educating people. He simply picked a few people that he new personally to work with him. Bill thinks he was the lucky person to be picked by this mentor because he showed good discipline.

Bill has bought and sold 360 houses. He does not have make many deals in which he personally speaks to the home owners he buys from; he probably only talks about 10 percent of these home owners. He never used mailers or signs.

If Bill was beginning to invest in Riverside with all his current knowledge, he would first call his agent and show them his accomplishments. Agents hear from many people who claim to be real estate investors but are not truly serious. For this reason, Bill keeps a portfolio of every house he has bought and sold. He shows this portfolio to agents during interviews. He then tries to persuade these agents that working with him is a good idea. He interviews multiple agents until he finds a couple of agents who are willing to be trained for his specific style of work.

Bill has not tried to develop relationships with people who control the most popular sources of REOs, but his name is somewhat well known by these people because of the business he does.

A typical investor will receive a call from an agent in which the agent explains what kinds of new inventory have recently come up. This agent might tell the investor that 20 new listings showed up. The agent and the investor would then look at many of those houses and attempt to narrow down their options. The kind of calls that Bill receives from his agents is very different. Bill’s agents will tell him which one of those 20 properties he would most likely be interested in. Bill would then ask who is listing the home, and the realtor would be able to tell him whether or not he had done business with that person previously. His Realtor would also be able to tell him what kind of neighborhood it is in, and whether or not he has done business in that area before. This Realtor would also give him a description of the other houses on sale in that area, the price they are listed at, and a description of the property Bill wants to buy. He would then make an offer slightly below the typical asking price of that neighborhood, and his offer would be made within just a few hours of being listed. This is how you beat the competition. You have to be able to make offers and close deals before the competition arrives.

What really gives Bill an advantage over his competition is the ability of his realtors to identify houses within specific streets of his city. Bill’s realtors are so familiar with their areas that they can look at a specific street, compare the prices of the other properties for sale on that street, and quickly determine whether or not a specific house is a good deal.

Agents are often skeptical of whether or not there are whole sale deals on the market. Part of the problems is that they are not disciplined, they are not experienced, and they are not accustomed to doing their job every day. It takes time for agents to spot a good deal quickly. Bill can buy properties out of the MLS even when the market is going up, and people claim there is no way to find a deal. When Bill told Bruce this in 2004, Bruce was very surprised and it taught him something.

During the real estate boom, everyone was an investor; you did not need to be good at investing during that time to make money. During that time, Bill was not worried about competition because there was so much business.

Name familiarity is very important when dealing with people who control the source of inventory. People who know Bill know that he has only backed out of 1 offer in his entire real estate career. If people know you are going to go through with your offers, they will be more willing to do business with you.

Bill typically puts a $5,000 deposit on his offers regardless of the home price. Bill recently lost an offer to someone who gave an offer for 100 percent of the purchase price. This was an investor trained by Bruce Norris.

When Bill discovers that he has made an offer on a property with multiple offers, he simply responds by giving them his highest and best offer. Bill doesn’t have a problem with making only $20,000 on a property which gives him an advantage when making offers. Some investors will not bother making a deal if they cannot buy it for 62 percent of the price.

Bill may be one of the biggest investors in California, but he actually lives in Utah. He has developed a business model which does not need him to make full time deals. Bill cannot think of anyone with a business model like this, and that is why he sticks to one city. Having all his properties within a very specific region allows him to easily manage all his properties. Bill does not invest at all in Utah.

Bill typically buys under the $200,000 price range. Many of his buyers are FHA buyers, and many of them are conventional. When the market gets slow, Bill does not fight it, he just quits and waits until things pick up. Bill did have some trouble getting back into the market not long ago, because many rules had changed since his last transaction. When Bill re-entered the market, the 90 day FHA rule was still in place, and Bill did not know about it. His first offer was an FHA and the appraisal came in $15,000 low. He chose to be satisfied with the $10,000 dollars he made off the property and move on. Bill encourages people to not fall in love with their properties, so they will make smart selling decisions. Bill decided to leave the market in 2007 because he was receiving multiple offers on all his homes, and the offers were too high. Things were getting too crazy. When Bill looked at the loan documents, his buyers would have a 10 percent interest rate with a 700 FICO score. Bill wanted to tell these people, “What are you thinking?”

Bill does not buy and hold rentals. Bruce thinks that is interesting because many people think that is the best way to invest. Bill believes that if you are a full time investor, flipping houses will be more profitable then renting. However, renting is a good option for passive investors. Passive investing is what Bill did when he first started investing. When he first starting buying properties, he bought 45 rentals and he eventually ended up with negative cash flow. When times get tough, people start moving which leaves you with vacant rentals.