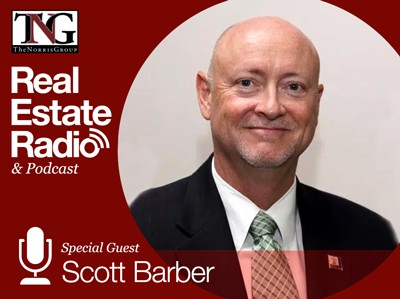 This week Bruce is joined once again by Deanna Lorson and Scott Barber. Deanna is the Development Director for the city of Riverside. Her job includes redevelopment, economic development, marketing, housing and neighborhoods, arts and culture, and capital projects. Deanna previously worked for the County of Riverside as the managing director of the Development Agency. Scott Barber is the Community Development Director for the city of Riverside. His job involves building safety and code enforcement. Scott has been involved in the creation of new, innovative programs for financial systems.

You may be calling on a case file that is out in the field with the officer. During that sort of situation, Scott won’t be able to answer your questions. If a lender calls for his bill, Scott will give you the bill and suspend daily penalties for 10 days. The buyer will have to pay for the fines already there, but the city will work with the buyer on getting the house rehabilitated. As long as you are making an effort to rehabilitate the property, you won’t have trouble.

The investor’s goal is to get something fixed as quickly and as well as possible, so that he or she can sell it for a profit. The city and the investor have the same goal. The problem comes in from perception, because the investor perceives property inspection as threatening. The city must make it clear that defying the rules will not be tolerated. Recently, some people in the financial industry challenged the city’s constitutional right to fine unkempt properties, but the city won. Scott lives in Riverside, and he cares about it, so he will not allow it to deteriorate.

Riverside recently rebuilt the Fox Theatre in downtown. The city used multiple funding sources to pay for its redevelopment. The performing center itself was not paid through redevelopment funds; It was paid for by a bond issuance. Redevelopment funds must be made in redevelopment project areas for specific reasons outlined in state law. The city financial officer was responsible for the bond issuance. This issuance was done before Deanna began working for the city. This bond involved a long term, fixed rate loan for the city’s capital improvement. You could compare it to having a trust deed against the future progress of the city. The decision to take on these loans is approved by the City Council.

Riverside city has a down payment assistance program. Five years ago, there was little activity in this program because prices were so high, but now that prices have declined, this program has played a significant role in encouraging long term home ownership in Riverside. This program is funded with redevelopment funds and some Federal funds. Rental assistance is primarily given from the county. However, Riverside city did receive one Federal grant for preventing homelessness. The name of the Federal program for down payment assistance is named The Home Investment Partnership. This assistance comes in the form of a “silent second”. This means the homeowner gets the maximum fixed rate mortgage that they can afford, and then the city helps pay for the gap between their mortgage amount and the home price.

There are projects that Scott handles which get his attention more quickly, and get dealt with more quickly as well. If you are involved in a project which provides a large number of jobs to the city, or if you are in danger of causing a large loss in jobs, then you can receive a discount for your utility expenses. If your project is a new development, then you get “fast track” authorization. This gives you priority treatment through planning, building and safety, and through inspections.

Riverside is one of the leaders in the Green movement for energy conservation. The city is providing a program for investors who make certain environmentally friendly changes to their investments, and Bruce thinks that investors will respond to this. Riverside is the first city to be labeled an “Emerald City” in California.

The fact that Riverside has its own resources saves it from a lot of expenses. There are many Inland Empire areas who are serviced by Edison for energy, and MWD for water. The forefathers in Riverside secured water rights for Riverside that are unmatched. The public utility programs in Riverside make energy use much cheaper for its citizens. Riverside has had a planning committee since 1915. This city has always been fortunate to have people in charge who were thoughtful of the future.

Riverside’s community surveys show that we are still having some population growth, but Scott is uncertain how accurate that information is. However, a census should be taken soon, and that will be more informative.

In 2007, the city of Riverside took a 20-year planning ahead mentality towards growth.

The city is divided into 7 equally populated wards, which are basically districts. Each ward elects a member of city council, and those wards represent the city’s governing body. The wards that receive the most redevelopment attention are those that have the most economically damaging problems.

There was a set of apartment units in Riverside which were in bad condition, but those units got fixed and eventually won an award. If someone has damaged property, they can come to the city to receive funds for repairs. The city is required to spend 20 percent of redevelopment funds on affordable housing, and part of that money goes towards new construction. However, there are very strict rules regarding what kind of projects are eligible for funding. These projects must be for long-term affordable housing.

There are 3 significant building projects in Riverside which had to be stopped after they had already begun. One of them was near Lowes. It was a condominium program, but the FDIC completely tore it down. They are currently marketing that property for development. The problem was that it sat in a raw lumber state for too long, which caused problems for the wood structure. There are two in the west side of the city, which involves a large home development. This project will not be dealt with for a while because there are 4 different banks involved in it. This is actually fairly contained damage, but the County of Riverside probably has more trouble than the city.

Thank you Deanna Lorson and Scott Barber for being a part of the TNG Radio Show.

One year ago, a court case determined that the state could not use redevelopment funds to fix the state’s budget. Right now, the state has attorneys looking for a way to challenge that decision.

On vacant properties, it can be typical for power meters to be gone. The city might have it removed if it presents a safety standard, or it might be stolen. Some people regularly look for abandoned properties to steal from. Early in the code enforcement process, Scott’s staff will record a notice of pendency. This allows investors to have records of these homes. The city’s goal is to get homes rehabilitated and reoccupied, so the city will work with investors. The city may even do on-site inspections with you, if you truly need it.