Greg Norris of The Norris Group #158 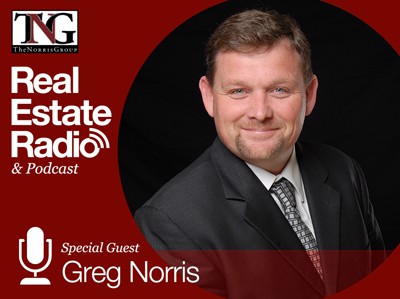 This week Bruce is Greg Norris, Bruce’s oldest son. He has been working for The Norris Group since 2004. He was the project manager of TNG’s Rosamond building project. His current job involves buying bank owned properties and trustee sales.

Before he began working for TNG, Greg was an electrician. He got training from a union program in Los Angeles. He started as an apprentice, but he eventually reached the position of general foreman. He then quit his job as an electrician and began to work as a project manager.

Greg’s experience in construction has helped him a lot in the real estate buying and selling business. He knows what it takes to finish a job on time, and he is able to quickly weed out bad construction workers. He also has the ability to quickly recognize repair problems on a house.

If you want to learn how to check a house for repairs, Greg suggests that you take the TNG home repair course. The TNG course will give you some shortcuts to quickly estimate repair issues. He also thinks you could learn a lot from going to a job site with a general contractor who could give you his perspective on repairing homes.

Depending on the inventory you are working with, repairs can be fairly repetitive. Some REOs require very light rehabs, but Greg usually only buys REOS that require heavy rehabilitation. Homes that need heavy rehabilitation is very repetitive, because you typically have to start with the home’s shell and rebuild it.

Greg is so efficient at estimating repairs that he doesn’t often spend time taking notes on his homes. The reason why he is so proficient is because he has experienced a lot of repair repetition. When he first started buying auction properties for Bruce, he was observing 40 to 60 homes per day. When you’ve seen that many houses, you get to the point where you can estimate home value before you even walk inside. However, it is impossible for Greg not to miss things, but he is not concerned about these unknown factors so long as he is 90 to 95 percent accurate on his repair estimation. He also puts a little cushion into his asking price if he feels there are going to be expensive unknown costs.

The age of the property significantly changes the risk factor for unknown repair costs. You need to pay attention to what repairs were made by previous owners. Old houses are more likely to have plumbing and electrical problems.

Because REO inventory has decreased, more detailed remodels, in which room additions and other add-ons are included, are sometimes necessary. These kinds of additions sometimes require building permits that not everyone can get their hands on. These scenarios may not happen very often, but Greg has encountered homes in which the previous owner attempted to do a remodeling job and failed. Choosing to make major corrections, such as in Greg’s example, will depend on your ability to determine what kinds of remodels are considered more desirable in the market. Greg has observed many homes, so he has the ability to quickly perceive what buyer’s will like.

When Greg is selecting a contractor, he always checks out the contractor’s license, they are required to go through an application process, and they must have workers compensation. After their credentials are approved, they make a bid on Greg’s work. The most competitively priced contractor will be picked.

Not many contractors have all their licenses and insurances. Many of them are handymen, and they prefer to do things without licenses. With the kind of work that Greg does, he cannot take the risk of hiring unlicensed contractors.

Greg says that contractor prices have decreased from the housing peak. They are not trying to put 20 to 50 percent on a job. They are actually just happy to have a job at all. However, he is not sure just how badly the housing decline damaged them.

Greg feels that he has really mastered his plan for housing construction. When changes do occur he often does not know about it, because Greg’s general contractor does such a good job at taking care of the problem. It took a long time for Greg to find all of his fantastic work partners, but now that they are used to his system, they probably would not want to work for anyone else. As a matter of fact, some of Greg’s contractors have tried doing jobs for other people using his construction strategy, but they came back later and told him that his plans don’t work with other employers. Greg’s construction experience gives him an edge as a project manager, and this education makes it easier for his contractors to work with him.

Greg uses the word Gucci to describe the new housing market that TNG has began to invest in. Greg is starting to see higher valued homes enter into trustee sales. This is not the kind of product that Greg typically works with, but he is interested in this area of the housing market and he is learning about it very quickly.

When someone walks into a TNG property, Greg wants them to see that everything is in order. TNG homes are staged and well repaired, so that makes buyers feel more comfortable with buying the property. It was difficult for Greg to get attention from realtors for a while, because people perceived that they were over repairing. The extensive repairs that were being done on Greg’s properties made it difficult for buyers to compare his properties to others in the area. Now some realtors frequently check with Greg to see if he has new inventory, because TNG properties have gained a reputation for being easy sellers. Greg’s buyers are even starting to overpay for his houses, because there are no comparable matches to TNG properties. Many buyers want the kind of finish that TNG homes have, but since they cannot find that kind of product from anyone else, they will buy TNG properties for higher prices.

Greg believes that staging is very important for making sales happen quickly. When people step inside a TNG property they can see from the staging job that it will be a good home to live in. He would give his staging model an 8 out of 10 for effectiveness. He does not spend any more than 500 dollars on staging per house, but he believes that he gets much more money than that in the resulting sale price.

When buyers shop for homes, one of the first places they look for is realtor.com. Realtor.com is a great starting place for home shopping, because all of the selling properties on the MLS are dumped onto it. TNG does a lot of advertising on realtor.com, so that they will show up higher on the list of “for sale” properties. Some experienced buyers don’t waste time on realtor.com, because they know that a lot of time can be wasted by trying to find a home by yourself. These people often prefer to work with realtors, because they know that a realtor can find a good home quickly.

When TNG receives an offer on a property, Greg often requires them to shorten free look periods and quickly purchase appraisals. He also asks them to get their home inspections done quickly if they desire to get one. When a person shows that they are willing to spend their money quickly, it shows Greg that they will likely finish escrow. Greg often checks out his buyers’ loan package, so that he can be sure that they are not lying on their application.

Bruce asks if lenders have become increasingly cautious. Greg says that their level of caution depends on the area they are working in. When TNG worked in Moreno Valley, he was fighting appraisals quite often, because there was a lot of evidence for what an REO was worth but very little evidence for what a repaired home was worth. Currently, the decreased pricing trend is beginning to reverse. Greg does not know if prices will continue to increase, but he feels that they likely will, because ownership payments are often lower than rent payments in that area. Most of Greg’s Moreno Valley buyers had FHA financing.

Greg has not received any feedback from realtors who claim that buyers are coming into the market because of the tax rebates. No realtor has ever asked Greg to hurry through the sale process, because their buyer wanted the 8,000 dollar check. However, the realtors may not be telling Greg that information because they have no need to.

If an investor is having trouble selling his or her home, Greg would advise them to go to the MLS and check out the competition. Find out what other properties are selling for, and compare the condition of your home with theirs. Sometimes homes are located in bad areas, such as near a railroad. Greg would never risk buying a property that is back to a railroad, or is in any other undesirable.

The 90 day FHA rule was just lifted. Greg is unsure of how much this will affect the market. He thinks that prices at the whole-sale level will come up, because now investors will not have to wait as long to resale. Greg is concerned about whether or not FHA appraisers will allow prices to appreciate, because they have always factored in depreciation into their appraisal values.