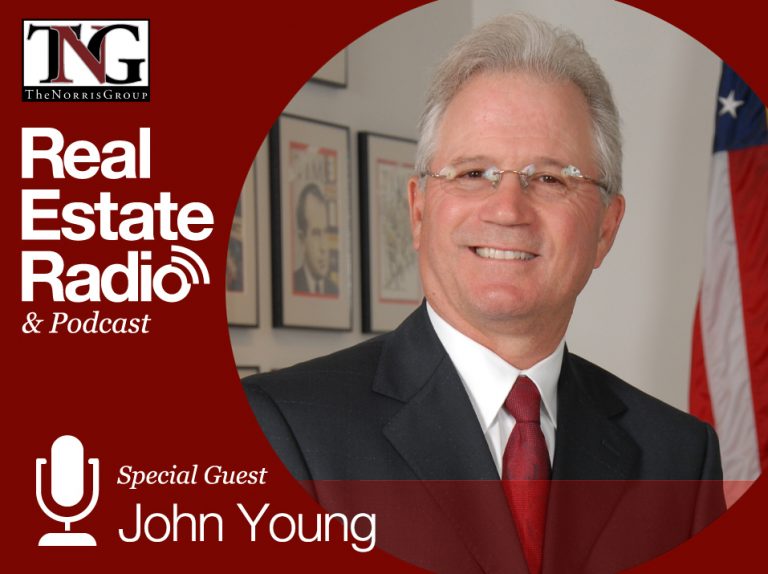 This week Bruce is joined by John Young. John Young is the founding partner of Young Homes which is located in Rancho Cucamonga, and he is the Vice President of the California Building Industry Association (CBIA). He has been associated with the real estate business for 30 years.

Bruce begins by asking John to contrast 1990 to what we are currently experiencing. John believes that we are currently in a tougher cycle. In the 80s we had a17 percent interest rates, and yet our current cycle is still more difficult. We are going through a much greater decline in our economy.

Most of the people in the industry are survivors that hope to continue through this down turn, so that they may start building again. Membership in the builders associations is down 50 to 60 percent, budgets are down, and layoffs are occurring. The association consists of public and private builders. John’s company is private and they have had to lay off people who have worked for his company for 10-15 years. John hates doing that because many of these people who have worked for him for many years have talent and they have become like family to him.

The sentiment towards helping builders is positive right now. In the last fifty years, builders were often looked at as the guys who would pave over everything and then take their money and run. Home builders create a lot of jobs and there has been a domino effect occurring in our economy as each industry’s struggles are affecting each other. The car industry has had a huge effect on our economy, but John thinks that the real estate industry is even more influential.

Bruce asks John what the time frame for a building project typically is. In normal economic times, it often takes 3-5 years for builders to finish all the paper work, prepare the land, build the homes, sell them and close the deal. That is a very risky time frame because a building project requires a lot of financial investment and you may not finish at the right time.

Builders have been called the most optimistic people in the world, and when you are dealing with an investment that requires a 3-5 year investment you almost have to be. The mentality you have when you first buy a property changes multiple times through the selling process.

Bruce asks John if many builders were caught off guard when they discovered that there was no demand for the product they were selling near the beginning of the down turn, and when it became obvious that the market was slowing down. John noticed things were slowing down during the third quarter of 2006, but then things perked up temporarily in 07, so that made the builders feel optimistic.

Bruce asks if John has confidence in the people he relies on to tell him when things are about to change for the worse. John does have confidence in their management, but what caught John off guard was the magnitude of the decline.

Bruce is sure that the lenders were all caught off guard as well. Bruce asks John about how they responded to the downturn. Most of the banks are working with the builders to finish projects, but it all comes back to whether or not they had a guarantee. John wishes they would try harder though. Banks are trying to work with the builders.

Sometimes when you have a project that gets appraised for less than the lender originally anticipated, the lender will ask you to participate with more capital (margin call). Today, most companies cannot do that. They either do not have the cash or they need to retain that cash.

Regionally builders are more affected by downturns than national builders. John does think that regional builders have been hurt worse. Some builders will have a better chance to make it through this downturn because they work in multiple areas with different cycles. Larger builders also have better access to capital.

Young Homes has built a couple thousand homes in Fontana over the last ten years and now those homes are competing with his new inventory because of the REO and short sale inventory.

Bruce asks if John ever considers getting rid of new home construction so that he can deal with the existing inventory. John says that is a good idea, and he has looked into it. Unfortunately, because of the size of John’s company, they cannot do that. They would have to change their entire business model to do that. However, there are smaller companies who have been able to modify their work force to do that.

Bruce asks John if the current unsold inventory of homes is still excessive. John says that it still is, but it has improved, and they are now almost finished with their inventory. The federal $8,000 dollar tax credit has helped John’s industry immensely but the state buying program has already run out of money. John’s company is currently working to get the federal program extended and the state he’s working on as well.

Bruce asks how the appraisal situation has affected builders. John says that now appraisal companies are managed differently, and the changes are not helping builders. The appraisers are using foreclosures and short sales as comps, which does not give builders fair market value. Too many foreclosures and short sales are being used. They are having to appeal almost every appraisal. So far the appeals have prevailed but it takes lots of effort and times.

As a founding partner in Rancho Cucamonga-based Young Homes, John R. Young has been an active participant in this highly successful Southern California home building company for nearly 20 years.

Together with his partners Reggie King and Jack Young, and the entire Young Homes management team, he has been responsible for the development of nearly 3,500 homes in communities throughout the Inland Empirefs San Bernardino and Riverside counties.

This well-respected and highly successful firm is currently ranked among the Inland Empirefs hTop 5 home builders. At the beginning, the Young Homes vision was to provide entry-level homes that would make the dream of home ownership attainable for young families and other first-time buyers. Although the vision has expanded over the years to include higher-end properties, the companyfs heart remains with the dreams of first-time buyers.

Youngfs experience in the real estate and home building industries extends over close to 30 years. His early years were spent as a successful sales representative and real estate broker focusing on single-family homes. Finding that he had a knack for the business, he purchased and proceeded to operate a residential mortgage company, specializing in FHA and VA loans, as well as conventional loans. The expertise he built in sales and finance has proven to be a major asset to the steady growth of family-owned Young Homes.

John Young has earned his acclaim as a trusted leader in the new home building industry. He is a past president of the Building Industry Association of Southern California and previously served as president of BIA/Baldy View Chapter and president of HomeAid Inland Empire, a non-profit charitable organization founded the BIA/SC and dedicated to building and renovating housing for the transitionally homeless.

Young is currently acting as Vice Chairman of the California Building Industry Association as and is active in the National Association of Home Builders by serving on the Board of Directors.

He is also a Board Member of the Chino Hills Community Foundation, spearheading a variety of community improvements.

Under the direction of John Young, Young Homes has grown steadily over the years, receiving well-deserved acclaim for its valuable contributions to the home building industry and the greater community. The company has been honored as Builder of the Year by the BIA/Baldy View and is the recipient of the 2005 BIA/SC Community Involvement Award.