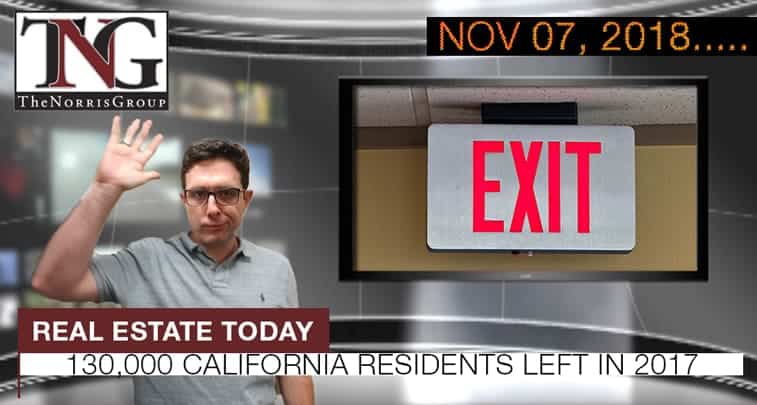 If California is the future, why are so many leaving?   Housing sentiment decreased to its lowest in a year according to Fannie Mae, meaning more people feel now is not a good time to buy.  Mortgage applications decreased 4% to their lowest in four years with the increase in mortgage rates.

“When it comes to real estate, don’t expect any sea changes coming from last night’s midterm election in which Democrats seized a majority in the House and Republicans tightened their control of the Senate.”

“California, many say, is the future. A center for creative industries and new technology—look at its impressive rollout of electric vehicles and autonomous cars—it’s also a diverse state, pushing progressive policies that could be models for the rest of the country.”

“The Mortgage Bankers Association (MBA) expects commercial and multifamily originations to close the year roughly on par with the record activity seen in 2017.”

“What a difference a few seasons make.  Housing sentiment fell to its lowest level in a year in October, according to a monthly survey by Fannie Mae.”

“A gauge of U.S. mortgage applications fell last week to the lowest level in almost four years as borrowing costs hit the highest since 2010, adding to challenges for the housing market.”

“It looks like home prices are going to continue their downward spiral. According to a new forecast, once final October numbers come in, they’ll likely show a drop from September to October — especially in high-cost markets like Hawaii and California.”

“California voters rejected Proposition 10, which would have reduced state restrictions on municipal rent control laws that proponents said would create more affordable housing options for tenants, but was opposed by real estate and mortgage industry interests.”

“Ask a home seller in the Los Angeles real estate market, and they might tell you housing prices have stalled or that their home hasn’t sold in “forever” (after a six-week list life).”

Aaron Norris will be presenting Technology Trends and Effects On Real Estate 2018 at OCREIA on Thursday, November 8.

Aaron Norris will be speaking at the Intelligent Investors Real Estate Conference 2018 on Saturday, November 10.

Millennial home buyers less interested in renting.  The latest Home Price Index Report from CoreLogic showed out of the 50 largest markets in the nation, almost half of them were overvalued.  Airbnb was partnering with San Francisco’s largest landlord, Veritas Investments, in order to help them increase their short-term rentals.