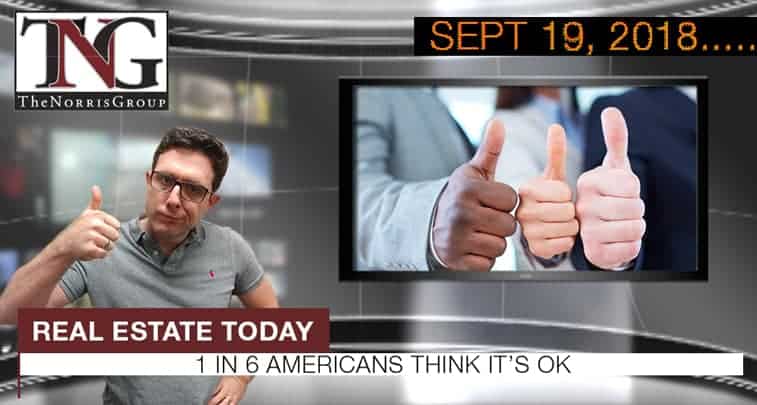 People misusing HELOC’s.  What is it about your house that could be giving you the hint to move?   The Commerce Department reported a 9.2% increase in housing starts in August to 1.282 million.

“Most owner-occupied homes are less than four decades old, even if the owners themselves are older.  But in certain areas in the Northeast, median owner-occupied ages are much higher than other U.S. regions, according to new data from the National Association of Home Builders.”

“Usually, it’s the stairs that make people move. Physical decline or a medical condition turn the daily climb to and from the bedroom into a dangerous undertaking. Elderly homeowners leave not only their homes, but also their communities.”

“U.S. housing starts grew modestly last month, driven by an outsize jump in apartment building that masked weakness in the pipeline for single- and multifamily construction.”

“Mortgage applications were up 1.6% from one week earlier, marking only the second increase of the past two months despite key interest rates rising, according to the Mortgage Bankers Association.”

“You shouldn’t use your house to help pay your monthly bills, but nearly 1 in 6 American homeowners thinks that’s just fine.”

“Order your extra recycling bin now: Proposition 10 season is upon us. Expect pounds of pro- and anti- fliers and pamphlets to litter your mailbox and front door between now and election day because it speaks to one of California’s great existential problems: ever-escalating rents.”

“Hong Kong has the most skyscrapers in the world. But going high hasn’t addressed the chronic housing shortage in the city of 7.4 million, which also boasts the world’s priciest housing market.”

Bruce Norris will be giving a Market Update with the Chino Valley Real Estate Professionals on Friday, Septemeber 21.

The Norris Group will be presenting its 11th annual award-winning black-tie event I Survived Real Estate 2018 on Friday, September 28.

Bruce Norris will be speaking at the 2018 Cutting-Edge Financial Tactics Brunch on Saturday, October 27.

What was the craziest thing you’ve ever found in a new home?  The answer was quite surprising.  HUD and the Commerce Department reported a 0.8% decrease in housing starts across the nation.  Out of all the voters in L.A., over half of them wanted to leave due to increasing rents.